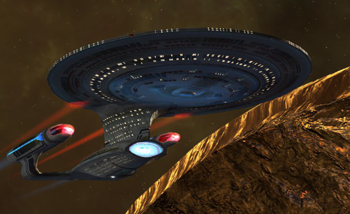 The USS Bajor on patrol.
Bait and Switch

is a Star Trek Online fanfic by StarSword-C, and a novelization of his Foundry mission series of the same title, starring his Federation Tactical Officer character from the game.
Advertisement:

Captain Kanril Eleya is the commanding officer of the Galaxy-class starship USS Bajor and is on a survey mission when the ship is reassigned to the Beta Ursae region around Deep Space 9 for civil defense. What is expected to mostly be a routine show-the-flag mission becomes vastly more critical when the Orion Syndicate raids backwater planets all over the sector block and kills or kidnaps sixteen thousand people. Eleya's ship is reassigned again to a task force mounting a counteroffensive.

What started as just one Fan Fic featuring Eleya grew into a full-on 'verse of its own comprising a number of works featuring StarSword's characters from the game. Sorted by character, then by In-Universe date:

The stories share characters and continuity with each other (cameos are somewhat common), and more recently with Fan Fics by fellow STO fan fiction author Worffan 101.

This page has the disambiguation "(STO)" appended to distinguish it from the trope Bait-and-Switch of same name.

Tropes present in the original Bait and Switch: