Characters in the Star Trek Online fic Bait and Switch.

open/close all folders
Crew of the USS Bajor NCC-97238 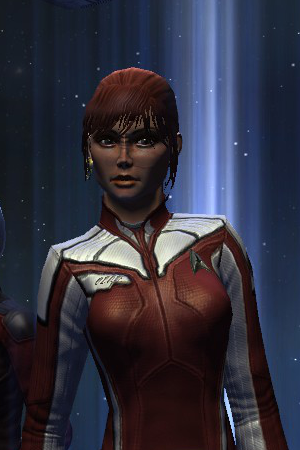 The main character. Formerly a non-commissioned space weapons technician in the Bajoran Militia, she was nearly killed defending sickbay on the Bajoran frigate Kira Nerys and was awarded the Silver Cross for her bravery. She attended Starfleet Academy after the Militia decommissioned the last of its ships. After graduating she served two uneventful tours on patrol duty near the Romulan border as first shift assistant tactical officer, then six months assigned to Deep Space 9 as assistant liaison officer to the Bajoran Militia, before transferring to the ShiKahr-class USS Kagoshima as second shift weapons officer.

During the Borg attack at Vega Colony Eleya was sent over to the USS Khitomer to help repel boarders and get the ship repaired. Upon her return she discovered to her horror that the Borg had killed or assimilated the ship's entire command staff, leaving her, as the seniormost lieutenant junior grade afloat, the acting captain. She took command and helped get most of the fleet to safety. Two years and a meteoric rise through the ranks later, she's the captain of the USS Bajor. 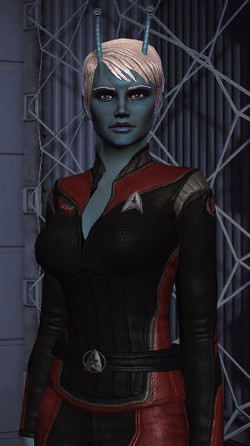 “Don’t get me wrong, I’m still your XO. The spirit of the regs is to protect the ship. If I ever think for a minute that your relationship, should you choose to pursue one, is endangering the ship or the crew, I’ll write you both up myself.”
Gender and Species: Andorian shen
Homeworld: Andoria
Position: First Officer and Tactical Officer
Headcanon Actor: Claudia Black

Commander Tesjha "Tess" Phohl, formerly second shift projectile weapons officer on the USS Khitomer, was sent back over to the Kagoshima with Eleya to be her temporary tactical officer. After the Kagoshima was able to save much of the fleet Starfleet Command made Tess's transfer permanent along with Eleya's command. Eleya made her the XO in addition to her post as tactical officer, and brought Tess along with her when she transferred to her next command.

Tess is quietly professional when acting as first officer, but is anything but when speaking as Eleya's friend. During space combat Tess operates the Bajor's weapons arrays and lets some Blood Knight tendencies through. 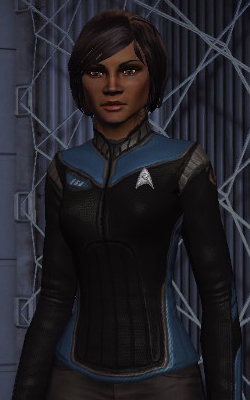 “And hey, maybe we’ll get to do some actual science in the DQ in spite of ourselves.”
Gender and Species: Trill female (joined)
Homeworld: Trill
Position: Science Officer
Headcanon Actor: Ursula Abbott

Easily the eldest member of the Bajor command crew, except maybe Dul'krah, Biri Riyannis is the fifth host of the Riyannis symbiont and a specialist in physics and xenobiology. She and Eleya met in 2407 when Biri, then a laboratory officer at Starfleet Academy, played the role of Eleya's science officer when the Bajoran took the "Kobayashi Maru". Eleya brought her aboard the USS Kagoshima to act as her permanent science officer, and Biri stayed with her into the present day. 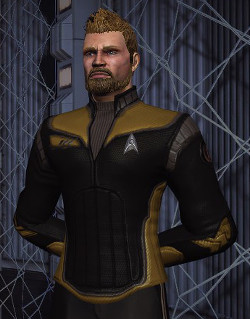 Born in the Gamma Quadrant on New Bajor, Lieutenant Commander Reshek Gaarra received a Starfleet ROTC scholarship to the University of Alpha Centauri. Upon graduation he was assigned to the USS Spruance as first shift deflector officer, where he stayed for seven years. Captain Parsa credits him with saving the ship after the chief engineer was decapitated by shrapnel during a fight with a D'deridex-class battlecruiser. He was assigned to the USS Bajor to replace Lieutenant Commander T'Var as Operations Officer but the files regarding her captain didn't come through. The night before his arrival aboard he and Eleya met in a bar and hooked up for the night, leading to a very awkward few days after they found out who the other was. They eventually became a couple, and Eleya often leans on him for psychological support. 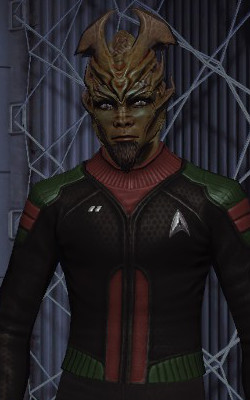 A member of a minor race from the Arucanis Arm, Korekh has been in space almost his entire life. A former officer of the Ver Eshalakh, the Pe'khdar military and police agency, he attended Starfleet Academy after the Pe'khdar Council of Clans was admitted to the Federation. After various postings as a security officer at a number of Starfleet installations he was assigned to the USS Exeter as third shift assistant security chief. In 2409 he was reassigned to the USS Bajor to serve as Eleya's chief of security. 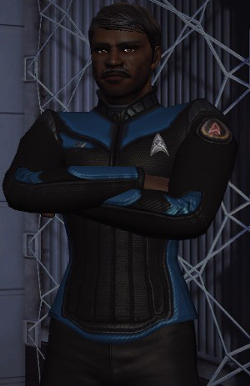 The Bajor's chief medical officer and the only human on the command crew, Warragul is also the youngest member of Eleya's staff.

“I have sworn my honor to the service of the Federation. I would suggest you do not make an issue of it, qarDaSngan.”
Gender and Species: Klingon male
Homeworld: Ajilon Prime
Position: Security Department (sniper)
Headcanon Actor: Tony Todd

A MACO-qualified sniper assigned to the Bajor's Starfleet Security detachment. He accompanies Eleya on an away mission in chapter seven.

A senior non-commissioned officer in the Bajor's Security department, he reports to Dul'krah and is also the commander of the ship's assault unit.

A Kurdish-Welsh MACO lieutenant brought on to replace SCPO. Athezra as head of the assault unit during the Iconian War.

A Supersoldier created by Section 31, Rachel Connor commands a MACO unit that was attached to Bajor beginning in the Iconian War. Hunted endlessly by her creators, her nature is known only to a few on the ship's crew. 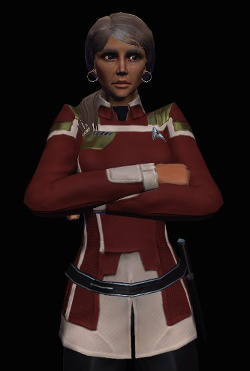 The commander of the Marduk Carrier Battle Group. A joined Trill and a heavily decorated veteran of the Dominion War.

Has a bio here.

Crew of the ch'M'R Aen'rhien
The main cast of the Legacy of ch'Rihan sub-series, crew of a Romulan Republic D'deridex-class warbird. 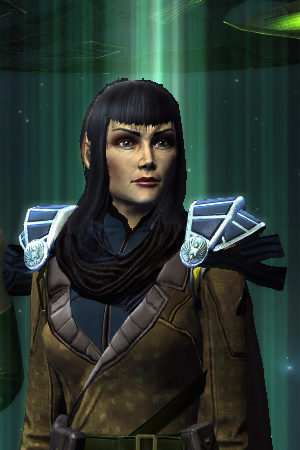 “You dishonor yourself. You prey on the weak and the innocent. You kill for glory like the worst kind of Khe’lloann’na. And now you dare to insult my honor?”
Gender and Species: Romulan female
Homeworld: Sheratan VII
Position: Commanding Officer
Headcanon Actor: Dina Meyer

The commanding officer of the Bloodwing, Morgan was born into a noble family in 2356 and served in the Galae s'Shiar Rihan (the Romulan Grand Fleet) before Hobus. While she missed the Dominion War on account of being too young at the time, she served during Shinzon's coup d'etat and the following civil war years and by 2387 was the executive officer (ih'hwi'saenhe) of the Raptor-class warbird ch'R Albintian.

Morgan's entire family died in the Hobus supernova, and Morgan was severely wounded when the Albintian was attacked by Nero while escorting the survivors of the Senate to safety. She was later forced to abandon the Galae in yet-to-be-explained Noodle Incident where the Tal'Shiar "destroyed my career", and eventually settled on Virinat to become a farmer, gaining a reputation as the best vintner on the planet.

After the Tal'Shiar/Elachi attack on Virinat, she swore herself to the Romulan Republic and eventually took command of a D'deridex-class warbird that defected from the Tal'Shiar, the ch'M'R Aen'rhien (the RRW Bloodwing in Federation Standard). 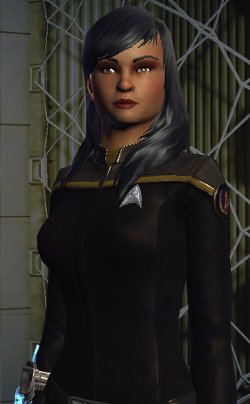 A career Starfleet officer from Iran, specializing in logistics, Jaleh Khoroushi took courses in Romulan Studies at Starfleet Academy, and after the alliance with the Romulan Republic was assigned to serve aboard a Romulan ship as an exchange officer. Like Eleya she's also known to be a mustang.

Jaleh Khoroushi is a practicing Twelver Shiite and her beliefs and practices are frequently touched on in the various stories. 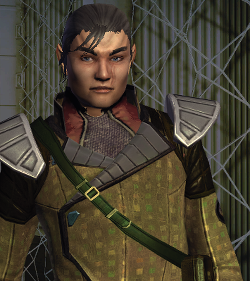 “All we can do is hope that [Sahuel’s] defection with the Aen’rhien and our subsequent actions will be enough to cleanse the stain on its name.”
Gender and Species: Romulan male
Homeworld: Kevratas
Position: Executive Officer
Headcanon Actor: Christopher Eccleston

Morgan t'Thavrau's Number Two, Sarsachen is a fifteen-year veteran of the Federation Starfleet. Unlike Jaleh, who is an exchange officer, Sarsachen holds a dual commission with the Galae s'Kreh'dhhokh Mol'Rihan. 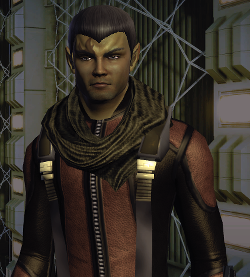 “I’m chief of security on this warbird, and I’m your friend. I get worried when my friends don’t eat.”
Gender and Species: Romulan male
Homeworld: Romulus
Position: Chief of Security
Headcanon Actor: Jon Huertas

Security and intelligence chief to the Aen'rhien, Tovan tr'Khev is the Legacy of ch'Rihan incarnation of the NPC Tovan Khev in the canon Star Trek Online game. A police constable on Virinat, he fled the planet with Morgan and swore himself to the Republic. 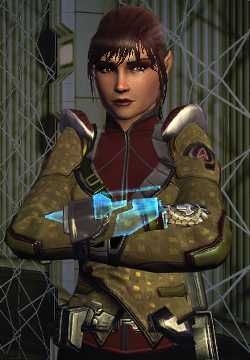 “That was an accident! And I wasn’t even on duty!”
Gender and Species: Romulan female
Homeworld: Romulus
Position: Tactical Officer
Headcanon Actor: Daniela Ruah

Chief medical officer of the Aen'rhien.