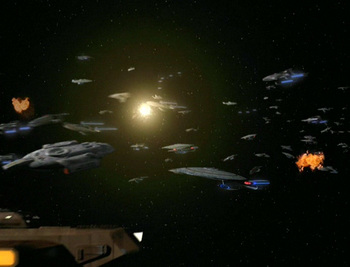 The 600 ride into the jaws of death, into the mouth of hell.
Advertisement:

Operation Return, the mission to retake Deep Space Nine from the Dominion, is now in full swing. Sisko sends waves of Federation Peregrine Fighters to attack the Cardassian ships, hoping to draw them out of position and break through. Dukat sees through the ruse and plots to give Sisko his opening, only to close back in and surround the Starfleet vessels. Damar also suggests arresting Rom's known associates to ensure there is no further sabotage during the battle. The three conspirators join Rom behind force fields in the Security office, leaving only Quark to help them.

Several wings of Cardassian ships break off and attack, creating the hole that Sisko wanted, but their formation gives away the fact that it's a trap. With the minefield due to come down in several hours, Sisko knows that the Trap Is the Only Option and deploys the fleet to proceed anyway. By this time, Dukat is already toasting his victory with Weyoun. Weyoun suggests that the Dominion will soon have to destroy Earth to eliminate any further resistance. Dukat disagrees, arguing that victory means convincing your enemy they were wrong to oppose you in the first place. He laments that Bajor never saw him as the paternal figure he claims to be.

Meanwhile, Odo and the Female Changeling are discussing the battle, and she notes the Federation's likely defeat. Thinking that she has finally changed Odo to her side, she casually mentions the impending execution of Kira's resistance cell, along with Kira herself. By doing so, she believes that Odo will never be encumbered by his feelings for Kira. However, Odo is horrified at this idea.

Things are going poorly for the Defiant when suddenly green fire bolts rain down on the Dominion ships. The Klingons have arrived. Their surprise attack opens a real hole in the Dominion lines, and the Defiant manages to break through alone. Seeing this, Weyoun wants the Dominion to intercept, but Dukat is in no rush to do so, reasoning that the station's defenses are more than a match for one ship.

Meanwhile, Quark recruits Ziyal to help him break out his comrades. The pair arrive at the brig with Hasperat Souffle. When the jailer decides to inspect the dish, Ziyal simply uses a hypospray to knock him out. Quark is forced to kill the Jem'Hadar guards with Guns Akimbo, and the prisoners are freed. Kira and Rom rush to get to the main computer to shut it down but get pinned down by Dominion guards. They're rescued by Odo and his Bajoran security. The prodigal shapeshifter has switched sides, saying he's not ready to join the Great Link quite yet. Kira and Rom proceed to a junction, but there's no time to shut off the computer, so they settle for taking the station's weapons offline to prevent them from blowing up the mines. But Rom is late by a single second: a beam of phaser fire shoots out and detonates the minefield, destroying all the mines.

Out of options, Sisko decides to hold a Last Stand in the wormhole. Weyoun orders the ship destroyed, but the station's weapons are offline thanks to Rom. The Defiant enters the wormhole, and Sisko gets swept up for an interview with the prophets. They criticize Sisko for wanting end his "game" prematurely. In turn, Sisko chides them for not coming to the aid of Bajor, the civilization that they have nurtured and that revers them as gods. The Prophets agree to help, but at a price: The Sisko is of Bajor, but he will ultimately not be allowed to rest there.

The Prophets return Sisko to the Defiant, where the crew watch as the Dominion fleet disappears. The Defiant returns to the Alpha Quadrant, and on board the station, the Dominion has a Mass "Oh, Crap!" moment as they realize that their fleet is gone. With the Defiant attacking, the station's weapons still offline, and 200 Federation and Klingon ships breaking through the Dominion ranks, Weyoun notes, "It's time to start packing."

The Female Changeling orders a retreat to Cardassian space. Dukat finds Ziyal to take her with him to Cardassia, but she confesses that she helped sabotage the station and says she doesn't belong on Cardassia. As she turns to leave, she tells her father that she still loves him. That's when a disruptor blast hits Ziyal square in her chest. The shot was fired by Damar, who tries to to convince Dukat to leave the station on the last Cardassian warship. Horrified, Dukat refuses to listen to him and cradles his dying daughter in his arms, assuring her that he loves and forgives her.

Sisko and his crew board the station and reunite as conquering heroes. Garak grieves over the death of Ziyal and still wonders why she loved him. Now, he'll never know. Dukat has been left behind, a broken and rambling shell of his former self. As he's being taken away as a prisoner of war, he gives Sisko his baseball back. Deep Space Nine has now returned to the hands of the Federation and its allies.