Nothing Can Stop Us Now! 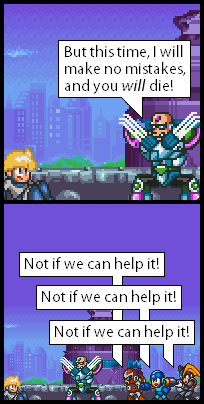 "See, George? This is why I don't use that kind of language. It attracts heroes."
Evil Blah: I have defeated Super Blah! Now nothing can stop me! I will take over the world! I am invincible! Ahahahahahaha... I can, umm...
[view zooms out such that Zeeky H. Bomb is visible]
Evil Blah: ... what the hell are you doing here?
Zeeky H. Bomb: Zeeky boogy doog!
[cut to crudely drawn explosion]
— The Demented Cartoon Movie
Advertisement:

The famous last words of any villain at the height of their power, just before the tide begins to turn in favor of the heroes and everything starts to go wrong for the villain, who can then only scream "Noooo! This can't be happening!"

It's usually followed by the Big Damn Heroes suddenly making their presence known, with a wry statement that says in so many words, "Oh yeah?" just before the climactic battle begins.

No phrase on Earth is as powerful as this one when it comes to invoking Finagle's Law, with the possible exception of "At least things can't get any worse".

Heroes, on the other hand, should avoid saying anything like "What Could Possibly Go Wrong?"

A form of Tempting Fate. Compare Evil Gloating, Nothing Can Save Us Now, Retirony, What Could Possibly Go Wrong?. Also see Near-Villain Victory and the Darkest Hour, the point at which the villain is most likely to say this.

Alternative Title(s): Nothing Can Stop Me Now