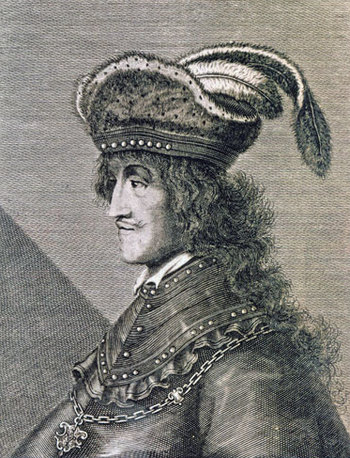 The Dragon of Albania
Now, surviving for 40 years of constant warfare in the 15th century is a big enough deal by itself, but this guy went above and beyond – his biographer credits him with personally killing 3,000 men on the battlefield during his career. That number might be a load of crap (then again, it might not) but the truth is that this dude is such an all-important hero to his people that his medieval battle standard is the present-day Albanian Flag, and all elementary school kids in Albania are required to memorize a song talking about how badass he was. It's like their pledge of allegiance. Or the lyrics to "Ice Ice Baby".
Badass of the Week
Advertisement:

(6 May 1405 – 17 January 1468), better known as Skanderbeg, was a medieval nobleman that is regarded as Albania's national hero. Seriously, it can't be understated how beloved this guy is among his people, even among those one wouldn't expect, but there is a very good reason why.

Gjergj was born in the Principality of Kastriot during a time when the Christian states of the Balkans were struggling against the ever-expanding Ottoman Empire, and Albania itself was highly divided between feudal lords fighting over fiefs. When Gjergj was 18 years old, his father Gjon became a vassal of the Ottomans and was forced to pay tribute to Sultan Murad II by handing over four of his children as part of the devşirme, a military system that conscripted Christian boys being taken from their families, converted to Islam and indoctrinated as unquestioning servants of the Sultan, or in their case, being turned into Janissaries. Gjergj was renamed Skanderbeg (Iskander Bey or "Lord Alexander" in Turkish after Alexander the Great) following his conversion to Islam, and quickly rose through the ranks after being trained in the Ottoman tactics and warfare, and gaining several victories for his liege.

Despite the gaining prominence and glory by serving the Empire, Skanderbeg was aware of the suffering and exploitation of his people and resentful over the deaths of his brothers who were poisoned under mysterious circumstances in the Turkish court. These factors alongside the struggle of the crusaders against the Ottomans inspired him to revolt. In 1443, during the Battle of Niš where the Ottoman host was fighting against a Crusader army from Poland, Hungary and Serbia led by John Hunyadi, Skanderbeg and 300 Albanians deserted their army by capturing the town of Krujë, as well as other forts occupied by Ottomans and uniting the squabbling Albanians. He declared himself the "avenger of the Albanian people" by renouncing Islam and reverting to Christianity, and gave an ultimatum to all those who embraced Islam or were Muslim colonists: baptism or death. Those that chose the latter were Impaled with Extreme Prejudice.

And so began the Albanian rebellion lead by Skanderbeg who established the League of Lezhë which also had support from the Republic of Venice. However, they were never able to field a number greater than 15,000 men against the Ottomans who commanded superior forces, so Skanderbeg had to use Salt the Earth tactics to disperse the enemy so they could become easy pickings for their guerrilla forces. This was shown in the Battle of Torviolli, where Skanderbeg faced against 40,000 Ottoman forces and used the mountainous terrain to his advantage and hiding his forces in the woods to encircle the unprepared enemies. The battle was a decisive Albanian victory, since they dealt a devastating defeat to the Ottomans estimated to be anywhere between 8,000-22,000 while Albanians suffered minimal losses (they were thought to have lost only 120 men, but realistic expectations put it around 4,000), gave a morale boost for European Christians and Skanderbeg was declared "Defender of Christianity" by the Pope himself and formally inducted into the Order of the Dragon by King Alfonso V of Aragon. This battle in particular started the 25-year old Albanian-Ottoman War.

Albania became an buffer state between Western Europe and the Empire, and the Sultan knew that it had to defeat Skanderbeg so they can continue their west-ward expansion and the Albanians were very effective in resisting. Murad II and his son/future heir Mehmed attempted to besiege Skanderbeg's seat of power Kruje at least three times, and each times was a failure - the same couldn't be said about the other Albanian lords that weren't as skilled as their leader. To make matters worse, the Republic of Venice declared war against Albania due to a dispute over a fortress and they even threw their lot with the Ottomans to overthrow Skanderbeg and placed a price on his head. But Skanderbeg being Skanderbeg defeated both the Venetian and Ottoman force sent on his way. While he won by pressuring the Venetians to sue for peace, this had the unfortunate effect of stretching thin his resources due to fighting in two fronts.

Over the years, Skanderbeg lost almost all his possessions to the Ottomans except for Kruje in no small part to the ever-changing allegiances of his allies, like his own nephew Hamza Kastrioti, who deserted him for the Ottomans after the chance of becoming his uncle's heir was robbed by his marriage and birth of his son. While Murad II's death and the ascension of Mehmed as Sultan gave the Albanians reprieve, since he was focused on putting down the Karamanids and Menteshe in the East, The Fall of Constantinople by his hands made him turn his attention West. Skanderbeg would prove to be undefeated in combat and would only eventually die of malaria, since no mortal men could have been able to slay him. The Albanian resistance would fall a decade later and their country would gradually fall under Turkish occupation. His death was mourned across the Europe since he had already achieved reputation as The Hero during his own time and Mehmed is alleged to have said, "Woe to Christendom, for it has lost its sword and shield" upon hearing news of his passing. Nonetheless, his efforts proved significant in halting the Ottoman advance and allowing Europe to properly prepare for future incursions.

After his death, a number of Albanians known as the Arbëreshë people

(or Italo-Albanians) migrated to Italy where his fame was preserved in Christian Europe for generations with even Voltaire praising him in his works. While he was largely forgotten in his own homeland, it wouldn't be until the 19th Century when he was rediscovered by the Muslim poet Naim Frasheri who published a work dedicated to Skanderbeg that inspired Albanian nationalists to demand independence from the Ottomans. They gave him Historical Badass Upgrade treatment by saying he had a Cool Sword with magical powers and his Automaton Horse could send the enemies running with fear. However, the religious aspects surrounding his motivations were de-emphasized because they could divide Albanians and it was in their interest to unite both Muslims and Christians into one people. In addition to serving national cohesion, his transformation into a national symbol served as an argument for Albania's cultural affinity to Europe because the national narrative of Skanderbeg symbolized the sacrifice of the Albanians in "defending Europe from the Hordes from the East".

Since then, he is revered by Albanian irrespective of faith; case in point, King Zog I of Albania

was an Sunni Muslim that took the parallel name Skanderbeg III by claiming to be indirectly descendant from him through Skanderbeg's sister, later on the Communist leader Enver Hoxha

considered himself Skanderbeg's heir and it was especially during the communist regime that his figure was mythologized to give legitimacy to the government, and more recently Albanian Catholics regard Mother Theresa of Calcutá as his ideological heir of guarding the boundaries of Catholicism and Albanianism. As such, criticizing Skanderbeg is considered very offensive to Albanian national honor since he is an important symbol for their identity as an people, regardless of faith and creed. Curiously, Skanderbeg was a contemporary to Vlad the Impaler from Romania and fellow Order of the Dragon member, and they share many parallels such as waging war against the Ottomans after becoming their hostages, utilizing similar tactics that they learned from their enemies and being regarded as the defender of their nations and Christianity. However, Vlad is better known due to serving as inspiration for Dracula and his association with vampire myth, while Skanderbeg is relatively unknown outside of his own country in no small part due to Albania becoming an very reclusive Commie Land during the Cold War.