Useful Notes / The Fall of Constantinople 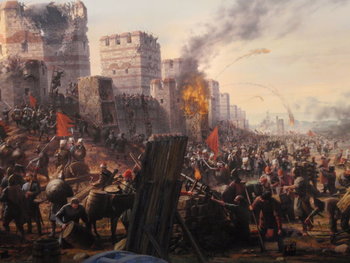 The City of Constantinople (nowadays' İstanbul) was the capital of what is now known by historians as the "Byzantine Empire". This was a direct successor of The Roman Empire, and as such is sometimes called the Eastern Roman Empire. The Byzantines were known for their preservation of some of the "Lore of the Ancients," including technological achievements, high literacy and a reputation for artistic craftsmanship, having innate advantages due to their superior political stability. They were also strong defenders of Greek Orthodox Christianity. They were a potent military force; not as exotic as a stereotypically medieval Proud Warrior Race, but quite professional with a well-earned reputation for strategic and political skill. While seldom strong enough to think of expansion, the Byzantine Empire managed to endure for several centuries. However, Constantinople slowly fell into decline. In 1204, the Fourth Crusade captured and pillaged the city. They occupied Constantinople for several years until the city was retaken in a coup by the Greek warlord Michael Palaiologos, a descendant of the Angelos family who the Crusaders had deposed, who declared himself The Emperor of the restored Byzantine Empire, now effectively little more then a Land of One City. There was for a few generations a minor Renaissance in the City, but its time was soon to come to an end.

In the meantime more Turkish migrants arrived from the steppelands to set themselves up as "ghazis" (something of a cross between holy warriors and brigands; "Islamic cossacks" if you will). Eventually they took the service of the chieftain Osman and formed what would become the Ottoman Empire. The Ottomans expanded and conquered territory until they surrounded Constantinople. An attempt was made to conquer the city but it was frustrated by the coincidental arrival of the Mongol/Turk Timur the Lame (aka Tamurlane) on the other side of the Ottoman Empire. It would be left to Mehmet II, later known as The Conqueror, to finish the job.

The Ottoman forces available outnumbered the entire population of the City, let alone the tiny garrison of soldiers. However the walls of Constantinople were among the most formidable in the world. For this reason many of Mehmet's advisors counseled against the campaign. However Mehmet plodded on. There was little prospect of aid from the West since it was finishing the Hundred Years War, although there was some which distinguished itself. Still, the city refused to submit. In addition to their vast numbers, the Ottomans also had massive siege cannons at their disposal; this was one of the first major campaigns that used gunpowder along with the aforementioned Hundred Years War. Despite all these advantages, Constantinople was a tough nut to crack. Assault after assault was repelled. The Turks even dragged a number of galleys across land to dominate the harbor in an expert maneuver. Finally the Turks breeched the walls and swarmed into the city. The last Emperor, ironically named Constantine XInote the first Constantine established Constantinople as the capital of the Empire, died fighting. As was customary the Turks sacked much of the city but fortunately the layout of the neighborhoods allowed many of the citizens to barricade themselves long enough to negotiate reasonably favorable terms of surrender. After this Constantinople became the capital of the Ottoman Empire. The city was virtually depopulated after the conquest, but rapidly recovered, and would once again obtain its former status as the world's largest city.

Contrary to popular belief, the Ottomans did not immediately rename the city as Istanbul. Although the city was referred to as Istanbul by the Turks and native residents even before the conquest of 1453, in most official doctrines, the city was referred to as the Turkified version of Constantinople (Konstantiniyye). Istanbul did not become the official name for the city until 1930 during Mustafa Kemal Atatürk's reforms that shaped modern Turkey, several years after the fall of the Ottoman Empire following World War I.