Literature / Children of Earth and Sky 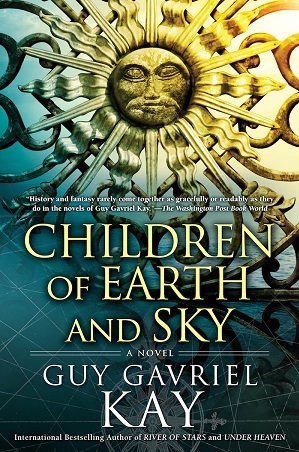 A 2016 Historical Fantasy novel by Canadian author Guy Gavriel Kay, set in the same world as Kay's earlier novels The Lions of Al-Rassan, The Sarantine Mosaic and The Last Light of the Sun; but at a time period equivalent to the early stages of The Renaissance.

Children of Earth and Sky tells the interweaving stories of a varied group of people 25 years after Sarantium, glory of the Jaddite world is conquered by the armies of the Asharite Osmanlis. In the present day, from the small coastal town of Senjan, notorious for its pirates, a young woman sets out to find vengeance for her lost family. That same spring, from the wealthy city-state of Seressa, famous for its canals and lagoon, come two very different people: a young artist traveling to the dangerous east to paint the grand khalif of the Osmanli Empire at his request—and possibly to do more—and a fiercely intelligent, angry woman, posing as a doctor’s wife, but sent by Seressa as a spy.

The trading ship that carries them is commanded by the accomplished younger son of a merchant family, ambivalent about the life he’s been born to live. And farther east a boy trains to become a soldier in the elite infantry of the khalif — to win glory in the war everyone knows is coming