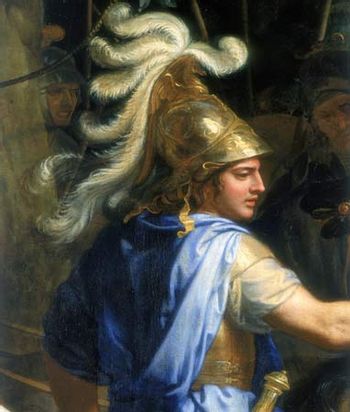 "There is nothing impossible to him who will try."
"Alexander the Great was the king of Macedon during the 4th century B.C. who saw the Mediterranean, the Middle East, and Asia and decided they would make a really bitchin' backyard."
— Cracked, on Alexander

Born in 356 B.C., full name Alexander III of Macedon, he was the son of Philip II of Macedon and Olympias of Epirus. "Alexander" is actually the Roman/Latin form of his name, which is in fact (Ἀλέξανδρος) Aléxandros in Greek, and was how he was known in his lifetime, by his peers, and by himself. During his conquests in Persia, he adopted the customs of the Persian rulers (who called their rulers "The Great King", most famously Cyrus the Great, whom Alexander saw as a role model), and became Ἀλέξανδρος ὁ Μέγας/Aléxandros ho Mégas/Alexander the Great.

In his lifetime he came to acquire the following titles: Basileus (King) of Macedon, Hegemon of the Hellenic League, Shahanshah of Persia, Pharaoh of Egypt, Lord of Asia. He is generally considered one of four great conquerors (alongside Julius Caesar, Genghis Khan and Napoléon Bonaparte) whose military and political activities literally changed the world. He was taught by Aristotle until he was about 16; it's said he was particularly interested in his teacher's lessons in geography and on Homer (he was known for carrying his copy of The Iliad with him wherever he went). As a young man he served in his father's army as a commander in his campaigns, and came to power after the assassination of his father by the captain of his bodyguard. He benefited greatly from the military reforms of Philip, who developed the Macedonian phalanx formation and introduced the sarissa (a pike roughly twice the length of a typical Greek spear), which gave his army an edge over the rest of Greece and a force that could potentially expand the power of Greece outside the Peloponnese peninsula. Alexander promptly put down a series of rebellions around the Balkans and attracted other allies and fence-sitters to support an invasion of Persia. He was elected Hegemon of the Hellenic League (composed of Macedonian allies, subjects and other city-states and kingdoms, except of course for the Spartansnote This was a famous mockery of the Spartans for turning down this offer of invasion, more or less intended by Alexander to note that they missed out on their chance of participating in the greatest glory of Greece and that they couldn't claim any part of Alexander's glory).

He marched his army into the Achaemaenid Empire of Persia that governed over Asia Minor, the Levant, the Arabian Peninsula, the Persian Gulf, Bactria and frontiers into Central Asia. To the Greeks of the ancient world, this was more or less the edge of the known world and Alexander's invasion was more or less synonymous with conquering the world. In actual fact, Alexander's empire was only slightly smaller than the Achaemenid Empire at its height, was exceeded by the Han and Tang dynasties, and would also be exceeded in size by other land empires such as the Mongol Empire and the Russian Empire, albeit in terms of territory it was larger than The Roman Empire at its height. His famous campaign began in Egypt and marched alongside the coasts, taking over cities, winning over allies, sacking and murdering rebels and holdouts and wrecking the Balance of Power on which the Persian Empire was based. After Alexander's forces defeated the enormously numerically superior Persian armies and forced King Darius III to flee the Battle of Gaugamela, Darius was assassinated by a general who fled with him and Alexander seized control of the empire. Alexander is one of a very few military leaders who never lost a battle, and was notably willing to absorb tactics and soldiers that impressed him - notably, after Gaugamela, the use of war elephants. Later, Alexander's forces marched into Bactria and India, where Alexander was forced to stop his expansion under the threat of revolt from his army, who were beginning to wonder if he truly would march to the very end of the world, circumstances permitting. Alexander married a Bactrian woman named Roxana, who later bore him a son after his death. Alexander died in 323 B.C. after a period of sickness in Babylon. It's unclear exactly what killed him. Some historians have suggested that he died of alcohol poisoning after a drinking contest with some of his soldiers, others suggest that he was poisoned, and still others believe that he may have caught some form of disease, specifically untreated typhoid fever. His empire collapsed shortly afterwards, with his generals dividing up Persia, Egypt, and Macedonia amongst themselves.

All the surviving sources we have about Alexander's conquests and reign come several centuries after his death and as such there's a lot of internal contradictions and diverging accounts. One thing that comes through clearly and which is borne out by archaeological evidence is that the man was a bunch of contradictions piled on top of each other. He was intelligent, rational, loved the arts, philosophy and poetry, but he was also an alcoholic with Testosterone Poisoning and prone to bouts of brutal violence and sadism. He was capable of acts of generosity and kindness to conquered peoples and his subjects (notably, when he asked King Porus how he wished to be treated, Porus said, "like a King", and Alexander rewarded him by restoring him as a monarch, beneath only Alexander himself). However, he was also capable of sadistically tying Batis, the commander of Gaza, to a chariot while the man was still alive and dragging his body around apparently - if we can believe the chronicles - to cosplay as Achilles in The Iliad. He and his allies claimed to be liberating Persian cities from the tyranny of Darius, only to more or less sack the cities and sell people and inhabitants into slavery. As for patronage of arts and philosophy, he famously destroyed Persepolis, the center of Persian government and learning, and burnt many of its libraries - though it has to be said, the stories go that he did it while drunk out of his mind and was was very remorseful/embarrassed about it later. In Iranian chronicles under the Parthian and Sassanian empires, Alexander is remembered and vilified as the man who destroyed their culture and heritage.

To his own soldiers, he was A Father to His Men and a Frontline General willing to banquet and party with them even after he became Pharaoh, Shahanshah ("King of Kings" in Persian, which is the title all Persian rulers used) and other titles, but his bouts of rage, fueled by alcoholism, often led him to take his anger out on them. In one notable incident, Alexander murdered one of his companions, Cleitus, in the middle of an alcoholic binge. Notably, Alexander could be an extremely Bad Boss, whether in viciously purging officials he deemed corrupt or inept, or even punishing his entire army when they revolted and refused to go any farther by leading them home through the Gedrosian Desert, where thousands died. Likewise, Alexander claimed divine heritage (though that particular story was started by his mother, Olympias) and, according to some reports, starting claiming to be a God-Emperor or in some cases seemed to see himself as a God, which even his fellow countrymen found too much even in their time and place.

In short, Alexander was the personification of Hot-Blooded, his fire leading him to amazing achievements and horrific brutalities at the same time.

Alexander's own policies also created divisions among his generals. He started syncretizing aspects of Greek mythology and culture with that of Egypt and Media. He called himself Pharoah, and identified Ammon as an aspect of Zeus. To the eyes of his Greek soldiers, he was Going Native to an unacceptable degree, dressing in Persian fashion and custom, asking his men to kneel before him and, most offensively to them, recruiting and promoting Persian soldiers and commanders to ranks in his combined armies on the basis of merit and competence, seemingly treating the Macedonians and allied Greeks no differently from the others. The challenge of ruling the large empire of Persia was quite a difficult feat for the Achaemenids, and Alexander, after wrecking and destabilizing it, more or less wanted to put it back in place only with himself in charge. Alexander seemed to want to reconcile the unfamiliar and seemingly strange culture of the East with the European West, and he encouraged syncretism, cultural contact, intermarriage with locals, and even seemed to suggest resettlement and exchanges of natives from Persia and Media to Greece and vice versa. This rather positive aspect of his reign was valued and admired in Asia even after his death and the dissolution of his conquests, and influenced central and South Asian culture for most of a millennium afterwards. In Iran after the fall of the Sassanids and the rise of Shi'a Islam, Alexander came to be seen positively and even acknowledged as a Shah in The Shahnameh and in Afghanistan, Pakistan and North India (around Punjab where the River Beas was the furthest in India he ever came), the name Sikander (derived from Alexander) remains a name for warrior, champion or victor well into the 21st Century.

Alexander's conquests led to Greek culture being spread to the East, and ideas from the East going back to the West, marking the start of the Hellenistic period, which led to Greek becoming the lingua franca or common tongue of the Ancient Middle East, influencing Persia (Greek remained the language of administration well into the Sassanid Empire in the 6th century A.D.), India, Ancient Arabia, and Judea. In a 2009 poll conducted on Greek television, Alexander the Great was voted the greatest Greek of all time. Still, it cannot be denied that even if his conquests led to the Hellenistic empires and spread Greek culture across the Middle East and North-West India, it more or less marked the end of Greece's Classical era. His poor handling of his succession and addiction to war led to the Macedonian Succession Wars, where his generals (the Diadochi, or "Successors") ended up fighting each other. Eventually Greece would be swallowed by the Romans, who crushed the successor kingdoms of Pyrrhus, Mithridates and other Macedonian holdouts, and thereafter Greece would become part of the Roman Empire, and be Demoted to Extra. Likewise, modern historians note that Alexander set a bad example for the likes of Pompey the Great, Caesar, and later Napoleon, who all sought to invade, expand, and conquer in imitation of their hero, and much of this came at the expense of land, life and dignity of people on the ground, and it led many of them to a sticky end.