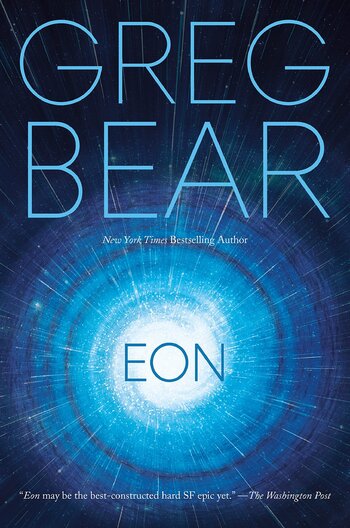 The Way is a science fiction series by Greg Bear, composed of three novels and a short story.

The series centers around an asteroid called the Stone that suddenly appears on the galactic scene and enters orbit around Earth. However, as the NATO scientists who explore the Stone soon discover, the human-built facilities inside the Stone may not have come from their future, but that of an alternate Earth. The libraries in the Stone tell of a nuclear war that has yet to occur in their time, leaving said scientists the task of changing the course of their own future.

Oh, and the descendants of humanity are still living in the asteroid, down a corridor in the last chamber that extends beyond the end of the asteroid. And they've been waiting a long time to come back home...

Eon should not be confused with the RPG of the same name.