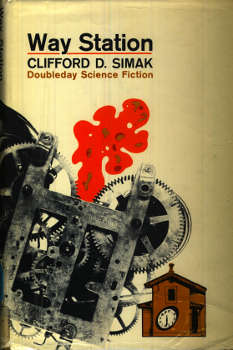 Way Station is a relatively short novel written by Clifford Simak in 1963, winner of a 1964 Hugo Award and barely mentioned today... except for the shameless borrowing of ideas later authors got from it, such as glowy beautiful humanoid aliens whose lifeforce manifests as an aura and become emaciated, ugly things when dead, holographic simulation rooms and sentient solid holograms who come to realize they are just constructs and aliens mindwiping Mankind to prevent its self-destruction.

Set in The '60s, the book chronicles three hectic days in the long life of Enoch Wallace, who lives as an hermit in Southwest Wisconsin, rarely leaving his home but for a daily evening stroll. He has lived there for so long that he has become a local legend, and he's rumored to be immortal. This piques the curiosity of a CIA agent who decides to investigate the rumor, and finds something really interesting in Enoch's backyard. Something that ignites an intergalactic incident at a very critical moment for both Earth and Galactic Center. You see, Enoch is the caretaker of a way station in the galaxy-spanning teleporting network, and has been on the job since the end of the American Civil War.

The book is filled with Simak's trademark style, with a foot firmly planted in straight-up SF and the other on plain old sense of wonder. He was a master of the rare Slice of Life science-fiction and it's at its best in this work, while at the same time hinting at events of galactic scope just around the corner and populating the galaxy with memorable alien species with just a few lines.