But Not Too White 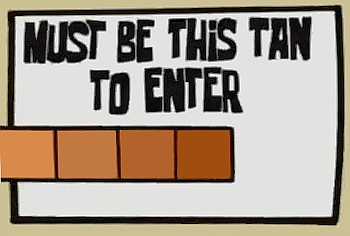 But for fish, being sun bleached is considered the "ultimate tan".
"Gotta keep the tan up. It's not a skin color, it's a lifestyle, Brian. You wouldn't know that because you're white as a ghost. You're haunting this house with your whiteness, Brian."
— Stewie Griffin, Family Guy
Advertisement:

Though fair ('white') skin has historically been — and in many places still is — sought after, Europe and its offshoots have gone off it lately. This has been due to the increasing popularity of long-distance 'holidays', typically to warm and sunny places.

Throughout the pre-1950s world, fair and un-calloused skin was a sign of being high-class and not needing to perform manual labor to survive. Great lengths were taken to maintain pale and dainty skin, including using lead and arsenic-based makeup and, during certain fashion cycles, ladies carrying parasols whenever going outside. There's a reason that in pre-modern times the word "fair" came to be a synonym of "beautiful."

Tanned skin was one of the new "beauty standards" promoted by Coco Chanel in the early 20th century, but it didn't quite take off until the '50s and '60s when people actually had the money and the means to do this kind of thing. Tanned skin was a sign that you had both the money and the free time to visit nice places with fresh air and sun, something just not possible for Europe's middle classes in the twenties and thirties.

Tanning reached an apex in The '70s, and again in The '90s and the Turn of the Millennium, when every actress and model had to have a dark orange tan in order to be considered attractive. Tan Lines from swimsuits were not considered unattractive, but a "farmer's tan" — the kind you get by actually working outdoors — is still considered a sign of low social class. This has also led to the rise of tanning salons, sunbeds, and hours of sun exposure without any form of UV protection, which consequently led to a rise in skin cancer, particularly in young people.

Today, the extent of this trope varies from country to country. In most of Asia paler is better, but in the general western world, a light tan is a sign of healthy physical activity. Pale skin is often associated with being a Nerd, goth, shut-in, or invalid. People who rarely venture into the sun will often be unwilling to wear shorts or take off their shirts in public for fear of revealing a "pasty" complexion beneath their standard clothing. Even people who lack the ability to tan will often be ashamed of their white skin tone.

Also see Eerie Pale-Skinned Brunette, Undeathly Pallor. Contrast But Not Too Black — despite the name, mind, this trope is not strictly its opposite. Compare But Not Too Foreign. May be considered a reason why Albinos Are Freaks.

Not to be confused with Dark Is Not Evil.