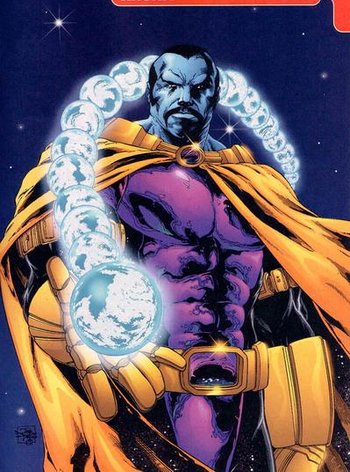 He's got not just one, but many worlds, at the palm of his hand.
"There are forces in the multiverse far beyond anything you've ever dealt with. Ancient, mindless evils that fill in the cracks and eat dimensions just for a snack. Monstrous deities and empires spanning Universe after Universe have risen and fallen in the span of forever! But there is still one individual, one being that they are all horrified of! When I saw him coming near my universe, I fled. Weep for your Universe, Linkara! Weep for all universes, for Lord Vyce is coming! And all that he sees, he conquers! HAHAHAHHAHAHAHAHAHA!"
— Doctor Linksano, Atop the Fourth Wall, Tandy Computer Whiz Kids: Fit To Win Review
Advertisement:

Sometimes an Evil Overlord, Galactic Conqueror, Dimension Lord, demon lord, archdevil, Physical God of Evil or Eldritch Abomination decides there's only one evil goal big enough that suits him — bring The Multiverse to its knees. Not only our Earth, but every dimension, every alternate reality, every single planet and life form in the whole multiverse. He may want to conquer it. Or he might want to destroy it. In both cases he's the ultimate threat, more powerful than anyone else our heroes has ever met. He can destroy planets, blow up entire cities with one finger, erase whole dimensions. To show how strong he is, he can even kill the Guardian of the Multiverse, the very first person that will oppose him. And when he says A God Am I, he's being modest. Fighting with him is usually our hero's greatest task ever. To defeat him there's usually a gathering of the greatest army of heroes that multiverse has ever seen. If he comes back after being defeated he will most likely be a shadow of his old self.

Is often used as an Original Generation villain or a Legion of Doom for a Intercontinuity Crossover.

This is one of the two highest-ranking Authority Tropes, the other being Guardian of the Multiverse. The next rank down is Dimension Lord.