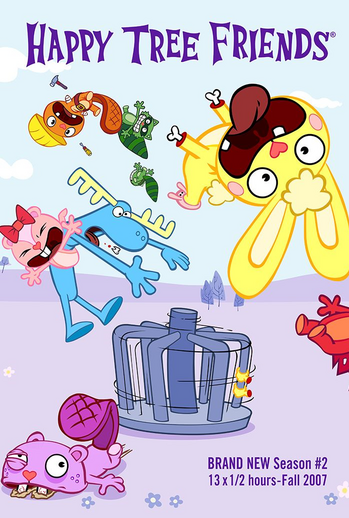 You should see when they try the swings.
"What I see here is a dozen people, all trying to make each other miserable. You disgust me, but it's also faintly amusing. Carry on."
— Quote from an attorney in a Dutch court (translated)
Advertisement:

Schadenfreude is a German word that means "the joy you get at seeing other people's misfortune" (Schaden = "damage", Freude = "joy"). (This phrase is commonly mistranslated as "shameful joy.") In other words, the "point-and-laugh" school of comedy. The Sadist Show is built on it. In this kind of show, there are no sympathetic characters whatsoever, and nobody will ever Pet the Dog. Everybody is both obnoxious and incompetent, beyond even the Unsympathetic Comedy Protagonist. The audience can't really root for them, so the fun is in seeing the characters suffer more than they deserve, more than Job, more than possibly everybody in the history of the human race combined. In short, it's a comedy, but not in the Shakespearean sense.

And not just any old misfortune like getting an Anvil on Head. The agony in a Sadist Show is a very sharp kind, the one that reminds you how totally unfair life is. It isn't a Sadist Show unless the characters suffer the very opposite of poetic justice. For instance, if our Unsympathetic Comedy Protagonist has been mugged, that's not enough. If the poor dope runs to report the mugging, and is arrested for jaywalking, and has to sit in jail while the mugger walks past their cell every day, that's the Sadist Show.

Sometimes, there will be a character who the audience kind of sort of roots for, but not really. One form is the No-Respect Guy (like Frylock from Aqua Teen Hunger Force) who tries to act decent but fails. However, the audience doesn't exactly root for them, because they're so ineffective, and they're usually a bit of a stick in the mud too. Another form is a Heroic Sociopath, who is as vile as the rest of the cast but is at least competent (like Brock Sampson from The Venture Bros.). But they're too evil to really cheer for, and how sympathetic can they be if they're stuck with the rest of these losers? The Venture Bros., with its emphasis on failure, reminds us that Brock may be competent, but he's in a pointless dead-end gig, and one that he is so over-qualified for that it's humiliating.

Note that this can be somewhat subjective, depending on how sympathetic and/or interesting one finds a character, a cast, or a situation.

This kind of show almost always has Negative Continuity, so the writers can inflict any kind of torment they like (including killing them off over and over again) without affecting future episodes.

Often overlaps with the Grossout Show. An Immoral Reality Show will usually be this in-universe. Maybe the result, cause, or overlap with a Crapsack World. Essentially the basic premise of a Dark Fic or Comedic Sociopathy. Compare Kafka Komedy. Compare and contrast Point-and-Laugh Show (Real Life Jerkasses, but dispensing with the torture in favor of just laughing at their existence) and Cringe Comedy (where we feel at least some sympathy for the victims, but that sympathy is outweighed by our voyeurism). The natural habitat of the Lethal Klutz. Also compare Black Comedy.