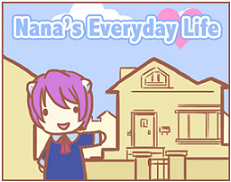 After having spent her life being raised in a lab, Nana suddenly found herself living on the streets with no money, no food, no friends. Compounded by the fact that she had recently lost her limbs in an assassination attempt gone wrong, this proved to be a very trying experience for our young heroine. Yet her troubles were just about to begin...

A fan-comic based off of the Anime/Manga series Elfen Lied, coming to you courtesy of comic writer Dan Kim, Nana's Everyday Life branches off in a completely different direction from its source material, featuring several cast members from other series, as well as a few original characters.

. Not Safe for Work.

It will make you cry.