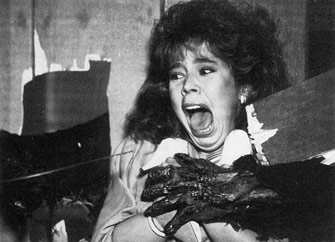 Well I'm quite sure that this sturdy wall will pro-*crash* Oh, Crap!!

Most of the time, heroes have the choice of "fight or flight" when faced with their enemies, but when that enemy is an Implacable Man, it's really more like "momentarily inconvenience" or "hide or flight". This is why 90% of Slasher Movies are (wisely) spent simply running the hell away from these menaces and hiding breathlessly in highly insecure locations.

Which leads us to this trope. Once the hero relaxes while hiding behind a wall or in a closet, and thinks the danger is past, a hand will break through the wall and grab him! This very effectively demonstrates that their enemy has Super Strength and a grasp on how to use it unconventionally. Usually, the villain will either punch the hero or pull them through the wall! Much like a Cat Scare (if cats could jump through walls), the audience will be scared along with the hero.

Variations include the newly risen zombie Ankle Drag, busting through a Beehive Barrier, and Vertical Kidnapping. Sadistic slasher villains will use the Sinister Scraping Sound to freak out hiding characters before pulling this. Depending on the barrier, can be a variation or a aversion of Concealment Equals Cover. See also There Was a Door.

Not to be confused with Armor-Piercing Attack.

One of the villains gets pulled through a wall when he thinks he can hide from Tony.

One of the villains gets pulled through a wall when he thinks he can hide from Tony.