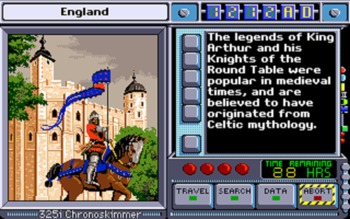 "All right, you primitive screwheads, listen up!"
The original version of Where in Time Is Carmen Sandiego? is an Edutainment Game released by Brøderbund Software in 1989. Unlike its 1997 remake, it follows the same strategy-based format as the earlier Carmen Sandiego games.
Advertisement:

As the title suggests, Carmen and her gang are now stealing from history, and you have to chase them through a series of different places and times. There are twelve countries you can visit across four time periods, giving you forty-eight possible destinations in total.

From a Worldbuilding perspective, this is notable as the first game in the series to establish that ACME headquarters is in San Francisco.