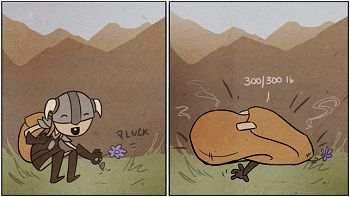 The flower that broke the camel's back.

"You can't carry any more! One more item to lug around and you might just collapse in a heap of swag."
— The World Ends with You
Advertisement:

A video game trope, similar to The Last Straw, where you can carry hundreds of kilos of equipment until you pick up one thing that puts you over the limit, either slowing you down immensely or stopping you completely.

The reasoning behind this is that if a nearly-full bag slowed you down accordingly, the slower speed wouldn't change gameplay much, but would annoy the player to no end, especially where Space Filling Paths are involved.

The weight-related version of Critical Existence Failure. May be a form of Anti-Hoarding to encourage you actually using up the stuff you collect.