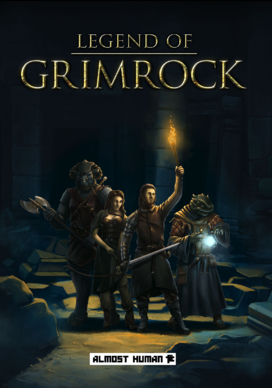 Legend of Grimrock is a 2012 indie RPG developed by Almost Human Ltd and available for Windows, Mac and Linux. Played from a First-Person Perspective with a party of four Player Characters, the game is a throwback to Dungeon Crawling classics like Dungeon Master and Eye of the Beholder.
Advertisement:

The game begins when four prisoners, created by the player, are accused of vile acts of treason by the court, but by the "mercy" of the king, the prisoners are given a chance to atone for their crimes via the ancient prison of Mount Grimrock. If the prisoners can make their way through the prison and escape it via the mountain's base, their crimes will be forgiven and they will be free to go. There is just one problem: Mount Grimrock is a den of evil and mystery, home to countless monsters, traps and other dangers. Will you survive?

The game is played in real-time, and provides the players with many puzzles to solve, harkening back to the RPGs of yore. A sizable amount of fan-made campaigns for the first game (created with its built-in Dungeon Editor) are available through Steam Workshop and Nexusmods.

Due to the positive reception of the first game, a sequel titled Legend of Grimrock II was produced and released on October 15, 2014. Set on an Island of Mystery instead of inside a single dungeon complex, it adds a new race (the cheese-loving, mutation-prone Ratlings) and several new classes, along with an overworld connecting various dungeons.

Legend of Grimrock I and II provides examples of: