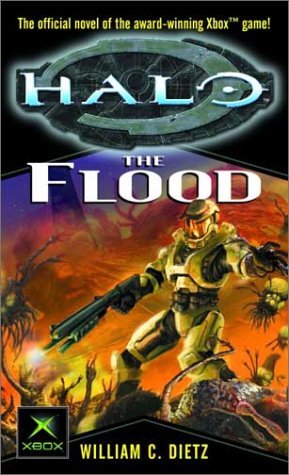 Halo: The Flood is the second Halo book, and was written by William C. Dietz in 2003. It is a novelization of Halo: Combat Evolved which goes into detail about not just the Master Chief's escapades during the original game, but those of his fellow humans (including the ODSTs) and the Covenant as well.
Advertisement:

The book got an Updated Re-release in 2010, with several small details changed to make it mesh better with later canon. Elements from the novel would be used for the plot of the licensed arcade game Halo: Fireteam Raven.

Not to be confused with The Great Flood, although the allusion is intentional.