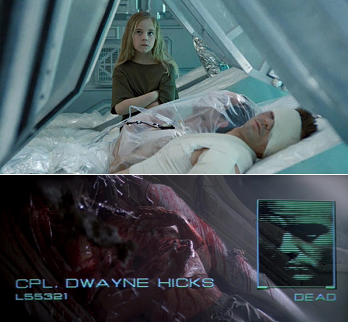 So you're a character in a genre where Anyone Can Die — but somehow, you've managed to survive the big confrontation. Once the sequel rolls around, everything should be fine, right?

Hey, that bridge over there looks a bit unsteady. Wait, what's that? It looks like the bridge is....falling...Oh, Crap! —

Guess Anyone Can Die after all. In fact, you're likely to bite it in the first few minutes if you appear in the sequel at all. And if you're a Final Girl who's in more than one installment of a Slasher Movie series, your life expectancy drops dramatically.

This can happen for several reasons: Maybe a character needs to stay single and the other character is in the way, maybe the actor died between films (in which case the death is usually offscreen, if not expect use of a Fake Shemp) or can only make a cameo, or maybe the character was only popular enough for a token appearance. Or the character is Killed by Request on part of the actor playing them. Whatever the case, Sudden Sequel Death Syndrome often comes off as more than a little mean-spirited, to the point that it can be compared to Fridging or Bridging if handled especially badly.

This generally has the effect of making the previous work a Shoot the Shaggy Dog / Happy Ending Override; however the main character will quickly move on with their life. Doing this is a great way to cause a rebellion in the fanbase over what is going to be without a doubt a Contested Sequel. The Snicket Warning Label may be applied here in cases where this strikes characters who got a Happy Ending in the previous work.

Compare Not Quite Saved Enough, Downtime Downgrade, Sequel Reset, Back for the Dead (where a long-absent series character is brought back only to get killed off), Bus Crash, Sequel Non-Entity and Happy Ending Override. Contrast with Doomed by Canon, where a character in a prequel gets killed off because his/her death is necessary for the preceding work's plot.