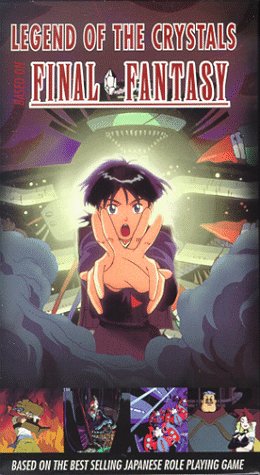 Final Fantasy: Legend of the Crystals is a 1994 Original Video Animation spanning four episodes, and the first anime installment in the something-somethingly popular Final Fantasy franchise. It is the direct sequel to the video game Final Fantasy V.
Advertisement:

For 200 years after the events of Final Fantasy V, the Planet R has become peaceful and serene. However, dark forces aim to upset this tranquility, and have captured three of the four crystals that regulate the planet's elements. Linaly and Prettz, the descendants of the previous game's heroes, are given the mission to protect the last of the four crystals, The Crystal of Wind.

Final Fantasy: Legend of the Crystals is the very first sequel ever made to an existing entry in the Final Fantasy series, and the first animated installment of the Final Fantasy franchise. It was released in the United States on VHS by Urban Vision in 1997 (ironically, before the game it was based on was ever given a US release), but that release is now out-of-print.

This OVA series contains examples of: