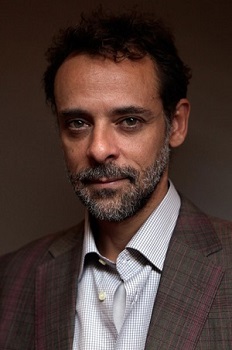 "I think if you're good and you can persuade people you're going to be able to do that role and ultimately the audience buys it, then it doesn't matter whether you were really a chimpanzee in disguise! You've done it."
Advertisement:

He is known by the stage names Siddig El Fadil through the mid-1990s and Alexander Siddig since. He is known for playing Dr. Julian Bashir in the television series Star Trek: Deep Space Nine, but has plenty of high-profile film and television roles under his belt due to his engaging performances and mastery of accents. He is the Trope Namer (kinda) for Estrogen Brigade, as his was the first to be created online, back in 1993. The second was Patrick Stewart.

Through his mother's side of the family he is the nephew of actor Malcolm McDowell. His father is a great-grandson of Muhammad Ahmad,

a famous 19th century Sudanese religious and Rebel Leader, and one of his uncles, Sadiq al-Mahdi,

was prime minister of Sudan twice. He was married to and has a son with DS9 co-star Nana Visitor, though they divorced in 2001.