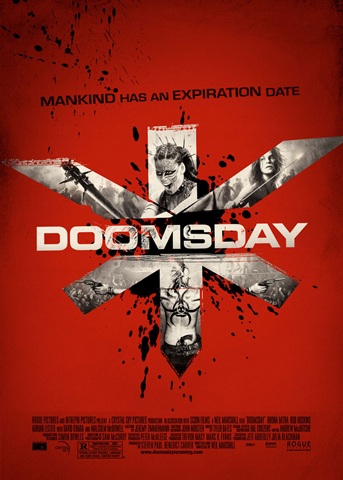 "They started this fire. They can burn in it!"
— Dr. Marcus Kane
Advertisement:

Doomsday is a gleefully derivative post-apocalyptic sci-fi action movie, written and directed by Neil Marshall (director of Dog Soldiers and The Descent) released in 2008.

In the present day, after an outbreak of deadly killer face-rot in Glasgow, Scotland as a whole is walled off and the general population left to... well... rot. The rest of the world thinks this is going a little too far, and respond by turning their backs on Britain as whole. On the last helicopter out of Scotland is a little girl who's just taken a bullet to the face, given into the custody of soldiers by her desperate mother...

Fast forward to 27 years later, and that little girl has grown up to be Major Eden Sinclair, eyepatch-wearing badass cop. Which is fortunate, because the Reaper Virus has arrived in London, and the corrupt government is ready to send a team of soldiers north of the border in the hope of finding a cure. Eden has 46 hours to get to Glasgow, find the man who was working on a cure before the wall went up, and save the day.

Too bad the surviving population of Scotland are not feeling particularly fond of the nation that abandoned them...