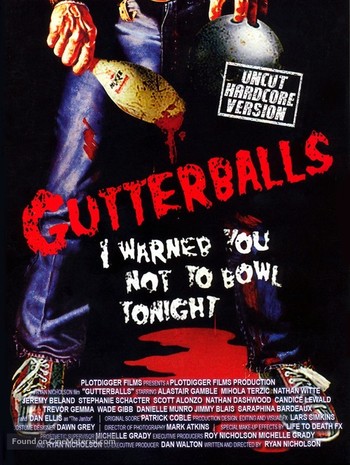 Hypothetical: What if Frank Zito hated bowling instead of women?
Heads will bowl.
Advertisement:

It's late night at the Xcalibur bowling center and tensions are running high between two rival teams; one led by the nasty Steve, and the other featuring a girl named Lisa and her friends.

Following a brawl, the teams are kicked out with the janitor telling everyone they can resume their game tomorrow. Lisa goes back into the bowling alley alone to retrieve her purse, and is the victim of a vicious gang-rape at the hands of Steve and his cronies.

The next night, a masked killer starts to dispatch all parties at the bowling alley, with his kills being counted on the scoreboard as strikes under the name "BBK".

A sequel, classily titled Gutterballs 2 Balls Deep, is in development. It will relocate things to a water park, and have the survivor(s) of this film be hunted down by a returned BBK.

Has no relation with the Disney Acid Sequence of the same name featured in The Big Lebowski, aside from the bowling theme.