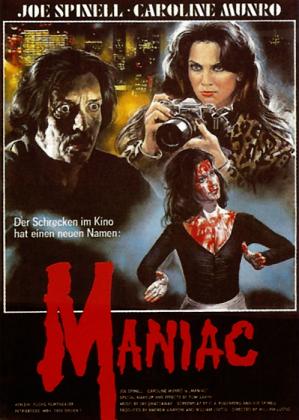 "I warned you not to go out tonight."
— Tagline
Advertisement:

A horror film from 1980. It was directed by William Lustig (Maniac Cop, Uncle Sam) and stars Joe Spinell in the title role.

It follows the exploits of the woman-hating and mommy issues-ridden psychopath Frank Zito, who wanders the streets of The Big Rotten Apple from one brutal kill to the next, breathing heavily and babbling incoherently all the while.

The film's effects were provided by Tom Savini, which includes the infamous "Disco Boy Scene" where a man's head explodes from a close range shotgun blast.

The film also has the dubious honor of being one of three movies the late Gene Siskel had ever walked out on.

The year 2012 was treated to a remake that was produced and written by Alexandre Aja and which had Elijah Wood star as the title character. It is mostly the same story, but with the twist that almost the entire film is shot from a first-person perspective. It also incorporates online dating.

Not to be confused with an even more crazy and totally unrelated 1934 film, Maniac. Or the 2018 TV show Maniac.

The 1980 version provides examples of:

The 2012 version provides examples of: