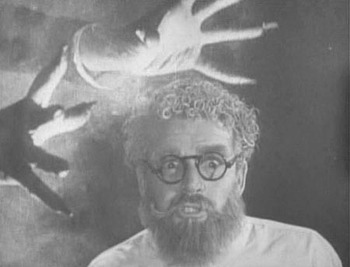 "Tonight, my dear Maxwell, I'm ready to try my experiment on a human!"
Advertisement:

Former vaudevillian Don Maxwell did something bad at some point in the past, leading him to hide out in the laboratory of deranged psychiatrist Dr. Meirschultz, working as his assistant. Meirschultz is your garden variety Mad Scientist who believes that he can revive the dead with shots of "super-adrenaline". After Don and the doctor steal the corpse of a young woman who killed herself by carbon monoxide, they successfully revive her, although only for a given definition of "successfully" as she is left in a zombie-like state.

However, the mad doctor isn't satisfied. He has a human heart beating away in a jar, and he wants a corpse with a destroyed heart to transplant his heart into. He gets a bright idea, hands Don a gun, and suggests Don shoot himself through the heart so Meirschultz can use him as an experimental corpse that he will revive with the donor heart. Don does the entirely logical thing and shoots Meirschultz to death instead. Unfortunately, for Don the act of murder sends him descending into madness. Cats are strangled, eyeballs are eaten, bodies are hidden, women lounge around in their underwear and there is a literal and metaphorical Cat Fight.

So, Fred Astaire this is not.

No connection to the similarly bizarre 1980 slasher film Maniac.