Film / Manos: The Hands of Fate 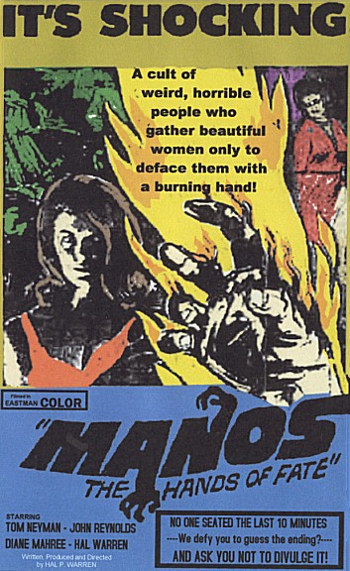 WARNING: May contain less defacing and burning hands than advertised. note  We certainly believe that people left early, though!
"Every frame of this movie looks like someone's last known photograph."
— Joel Hodgson for the Mystery Science Theater 3000 version
Advertisement:

"Manos" The Hands of Fate is a 1966 American No Budget horror film written, directed, produced by and starring Harold P. Warren. It is widely recognized to be one of the worst films ever made.

Mike and Margaret, along with their daughter Debbie and the family dog Peppy, find themselves lost on the way to Valley Lodge during their family vacation. As night begins to fall, they decide to spend the night in a strange-looking house on the side of the road. Torgo, the house's caretaker, greets them upon their arrival. Torgo sPeAkS wItH aN oDd EmPhAsIs, has extremely bulgy legs (a failed attempt by the filmmaker at making Torgo a satyr), and continuously refers to "The Master"—the undead leader of a cult dedicated to a dark god known only as Manos. The Master, Torgo and The Master's conclave of wives want to kill the intruders, but can't come to an agreement as to who to kill: The Master wants to keep Margaret alive as his (seventh) wife, Torgo wants to keep Margaret as a wife for himself, and the wives want to kill both Margaret and Mike but refuse to kill Debbie, which leads to them fighting amongst themselves. As the night continues, Mike and his family find themselves in great danger — and they eventually come face-to-face with The Master himself...

Texas native Hal P. Warren (who would become a fertilizer salesman later in life) pulled triple duty by writing, directing, and starring in Manos. Warren wanted to win a bet with Stirling Silliphant (a genuinely talented fellow, the screenwriter of In the Heat of the Night among others) by making a successful horror movie on a shoestring budget. Without any previous movie-making experience, Warren soon found himself in over his head—but he decided to press on with a bare-bones Bell & Howell camera, a lack of remote sound equipment, and a cast composed mainly of community theatre actors and local extras. The finished film provoked laughs instead of chills at its first screening in Warren's hometown of El Paso; Warren himself (demonstrating eerie prescience) suggested after the screening that someone could Gag Dub the film and re-release it as a comedy.

The film languished in obscurity for thirty years until the producers of Mystery Science Theater 3000 discovered it;note If you need any proof, view the entry for Manos in The Video Watchdog in 1992, then in 1993—from two-sentence description to a loving long entry discussing its cheesiness and appearance on MST3K the MST3K episode that featured the film proved Warren's suggestion right—and became one of the show's most famous (and beloved) episodes. For tropes related to the MST3K episode itself, please visit its Recap page.

For more laughs at the film's expense, check out The Agony Booth's recap

of the film, a crossover

with Splatterhouse, and a Retraux NES platformer.

Thanks to its popularity post-MST3K, Manos spawned a 2007 musical (Manos: Rock Opera of Fate, performed in Chicago) and a 2004 documentary (Hotel Torgo

). RiffTrax performed a live riffing of the film in August 2012, which you can purchase as a VOD.

In 2011, film buff Ben Solovey bought a host of old film reels hailing from distributor Emerson Films via an eBay auction, partially because he saw Manos listed on the collection of reels. That Manos' reel ended up surprising Solovey when he received it, because he'd actually bought the film's original 16mm workprint.

to help fund a complete high-definition restoration of the movie from the pristine-condition workprint; by the campaign's end, Solovey raised almost 400% more than the initial goal. A side-by-side comparison

of the restoration illustrates the dramatic difference between the restored version helmed by Solovey and the currently-available DVD release (created from third-generation sources and degraded beyond repair). A legal battle between Solovey and Harold's son Joe

held up the process, in which it was revealed that Hal never secured the copyright to the film itself. Ultimately, the restored film was released on October 15, 2015 thanks to Synapse films.

It featured a commentary track by Tom Neyman (who played the villainous Master, as well as doing many other behind-the-scenes jobs) and his daughter Jackey Raye Neyman Jones (who played Debbie), both of them providing some fascinating insight into the Troubled Production.

Jackey would later write a memoir, entitled Growing Up with Manos: The Hands of Fate: How I was the Child Star of the Worst Movie Ever Made and Lived to Tell the Story, going into more detail into the film's production and the Ragtag Bunch of Misfits who made it, as well as how the Mystery Science Theater 3000 episode changed her life and helped her reconnect with her father.

A sequel, entitled The Search for Valley Lodge, was reportedly in production

sometime in 2013 until they ran out of money; the crew supposedly filmed in El Paso and used much of the original cast. Production resumed in 2016

In 2015, an independent video game was made of the movie (or, arguably, the MSTing of the movie) in the style of a NES platformer was released on Steam.

, a card game based on the film. The game is endorsed by Jackey Neyman Jones.

Manos: The Hands of Fate contains Master-approved examples of the following tropes: