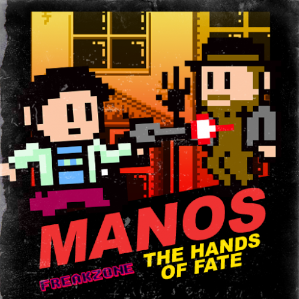 "Manos" The Hands of Fate

is a platform video game version of the infamous B-Movie, developed by FreakZone games and done in an 8-Bit Style. In the grand tradition of NES Licensed Games from The '80s, it adds a lot of extra story and content that sometimes has nothing to do with the source material, including monsters from other B-movies as enemies and bosses.
Advertisement:

, or the more improved PC version (pay what you want; $1 minimum)

. The Director's cut adds cutscenes, an extra stage and Torgo as a playable character. It can be purchased here

Also see The Angry Video Game Nerd Adventures, later released by the same developers, and recycles the The Giant Claw boss, and The Room: The Game, another 8-bit tribute to a So Bad, It's Good Cult Classic.