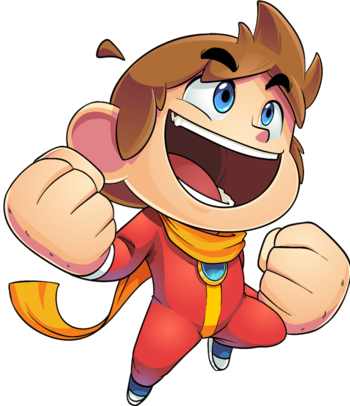 Alex Kidd was Sega's former mascot, before Sonic the Hedgehog was created. He starred in six games, all of them created between 1986 and 1990, and has had several cameo appearances since then.

In the first game, Alex Kidd in Miracle World, Alex is established as the prince of a land called Radaxian. His job is to save the land from an Evil Overlord known as Janken the Great and rescue the royal family. This quest involves him traveling around in typical Platform Game fashion, but with the additions of finding coins to purchase items and playing Rock–Paper–Scissors with bosses in order to be allowed to move on.

Most of the other games deviate from this storyline and feature different gameplay styles. Alex quietly faded away after the release of the original Sonic The Hedgehog, but he has had appearances in a few other games, including Segagaga, Sega Superstars Tennis, and Sonic and Sega All-Stars Racing.

After 30 years of nothing but cameos and occasional crossover appearances, it was revealed in 2020 that Alex Kidd would be getting a new game during IGN's Summer of Gaming event, in the form of a remake of the first game known as Alex Kidd in Miracle World DX, by the same studio that brought us Streets of Rage 4.

The games that he starred in are as follows: