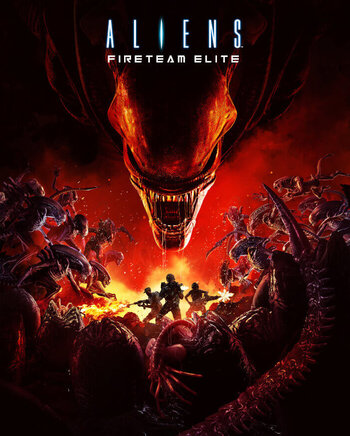 Aliens: Fireteam Elite is a Multiplayer Third-Person Shooter developed by Cold Iron Studio in collaboration with Disney's 20th Century Games, set in the Alien universe. The story is comprised of four campaigns, each containing three missions. It was released on August 24, 2021 on PC, PlayStation 4, PlayStation 5, Xbox One, and Xbox Series X and Xbox Series S. At least four 'seasons' of additional content have been released so far, with the first major expansion, Pathogen, released on August 30, 2022.

Approximately twenty-three years after the events of Aliens, Colonial Marines aboard the USS Endeavor receive a distress call from the Katanga, a missing refinery station in orbit over the planet LV-895. After boarding the station, they discover that the station has become the site of a xenomorph outbreak. After extracting the sole survivor, the marines descend to the planet below, hoping to discover and eliminate the source of the outbreak.

Players are paired with two additional player-controlled characters, or AI controlled combat androids. The player may customize their character's base appearance, as well as create a loadout for a number of classes available. In addition to starting weapons and gear, there are additional consumables, weapons, attachments and cosmetics that can be purchased, unlocked via level progression, or found in hidden caches appearing in each level.