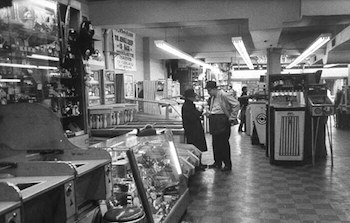 Arcade games go back a LONG way. The roots of the arcade are the midways, dime museums, and amusements parlors of the 19th Century (which often had visible arches supporting their roofs, and recessed arches for the attractions, hence the name). There, patrons could spend their dimes and quarters on kinetoscopes and phonographs, allowing the then-miraculous experience of listening to recorded sounds and watching moving images. When the novelty of those devices wore off, establishment owners repurposed them with lower-priced attractions for a wider crowd — workers and tourists would spend pennies on coin-operated shooting galleries, peep shows, fortune tellers, strength testers, candy dispensers, and even slot machines.

In 1931, David Gottlieb’s Baffle Ball introduced "pin games" to arcades and kick-started an industry. The games soon surged in popularity as designers added flippers and bumpers, even as some parents and legislators associated them with gambling, organized crime, and delinquency, and moved to have them banned. Even so, arcade owners replaced their novelty machines with pinball machines and electromechanical baseball, horse racing, and bowling games.

By the time municipal bans on pinball machines ended in the mid-70s, they were already fairly ubiquitous devices, filling up bowling alleys, laundromats, shops, and bars. Furthermore, pinball didn't dominate the space alone — they were joined by the electromechanical predecessors of Video Games, such as Chicago Coin’s Speedway (1969) and Motorcycle (1970). These machines used belt-driven discs and projector screens to simulate various thrills and activities.

This was the market that arcade video games would step into.

The first coin-operated video game was Galaxy Game, a version of Space War. One machine was produced and installed at Stanford University in September 1971. Two months later, Computer Space, a one-player multi-directional Shoot 'em Up based loosely on Space War, became the first commercially-available coin-operated arcade game. It was created by Nolan Bushnell and Ted Dabney, who would found Atari the following year. Computer Space wasn't a success, as gameplay was too complicated. So Bushnell created the much simpler Pong, the first successful coin-op arcade game.

Even with the popularity of Pong, arcade games didn't have dedicated venues, but instead stood in bars, restaurants, bowling alleys and gas stations. That changed with the 1978 release of Space Invaders, which launched video games into the mainstream, causing a national coin shortage in its native Japan and influencing pop culture around the world. It was soon followed by similarly successful shooters such as Galaxian and Asteroids the following year. By the end of 1979, video arcades were appearing across North America, Japan, and Europe. The Golden Age of Video Games had begun.

1980 saw a wave of classic games, most notably Pac-Man, as well as Defender, Centipede, Missile Command, and Rally-X. Arcades sprang up all over the place, and crowds of kids flocked in. More great games came in 1981-83, like Donkey Kong, Ms. Pac Man, Frogger, Galaga, Dig Dug, Pole Position, Zaxxon, Joust, Q*bert, and Dragon's Lair. But a bad case of Follow the Leader meant that the arcade market was also saturated with imitations. The Great Video Game Crash of 1983 happened gradually from 1983-85; while it had a much bigger impact on video game consoles, arcades were also affected by it to a lesser extent.

After 1985 in North America, things weren't quite the same for years. Arcades had a resurgence in the early to mid '90s, when the widespread success of Street Fighter led to the rising popularity of Fighting Games and eventually 3D games, but began declining again with the rise of arcade-quality consoles (the final nail could be said to have come from the Sega Dreamcast version of Soul Calibur, which actually surpassed the arcade version in quality). Arcade games returned to where they were from 1972-78 — an extra source of revenue for restaurants, movie theaters, and shopping centers, or part of a larger gaming venue like Chuck E. Cheese or Dave & Busters.

Outside of those applications though, starting around The New '10s there has been a small resurgence in retro arcades that intentionally try to recreate the look and feel of the Video Arcade of years gone by. These target both old and new arcade fans that want to enjoy an otherwise now-unusually seen entertainment venue, and experience the games the way they originally became popular. This also provides an accessible way to enjoy games that since haven't seen much attention and/or have never gotten a proper Arcade-Perfect Port at home, and in some cases never can (such as sit-down racing games or light gun games). These arcades most frequently follow the business model of having an upfront fee to get in but have all games set on free play, but others may have a smaller upfront fee with all games requiring only one quarter or no upfront fee and games having a higher cost to play. While they still are nowhere near as omnipresent as they were before 1985, this will likely be the closest the arcade game ever sees a comeback and many metropolitan areas in the United States have at least one, such as The Galloping Ghost in Chicago and Bishop Cidercade in Dallas.

In the United Kingdom, arcades were popular at seaside resorts until the mid-1990s, when the leap to 3D graphics meant higher prices than kids could pay.

In Japan, arcades (known as game centers) remained popular, and as with consoles, development moved over there. The Japanese created or codified new genres, such as the Fighting Game, Cute 'em Up, and Bullet Hell. They also standardized arcade hardware: Data East released the first general-purpose arcade board in 1980, and the Japan Amusement Machinery Manufacturers Association (JAMMA) introduced the eventual world standard for arcade cabinet wiring in 1985. To this day, the biggest franchises in the aforementioned genres usually get an arcade version of each new installment- if it doesn't debut in arcades first. Starting in The New '10s, Japanese arcade games started implementing a revenue-share model: the arcade doesn't buy the cabinet, they simply rent it out and the publisher takes a share of the revenue. This often results in the game implementing online-requiring DRM in order to ensure that the game can only be run by authorized arcades. This unfortunately makes it harder to import cabinets from outside of Japan and other authorized countries.

The term "arcade game" was also used more generically, especially in the 1980s, for games created for consoles and/or computers that imitated the fast-paced action of real arcade games. This usage of "arcade" has largely faded away, though sometimes its use on old game boxes and such still causes confusion.

, an archive of over 900 classic arcade games playable in-browser, in an attempt to spark interest in older arcade games.

Arcade Video Games of the 1970s

Arcade Video Games of the 1980s

Arcade Video Games of the 1990s

Arcade Video Games of the 2000s

Arcade Video Games of the 2010s