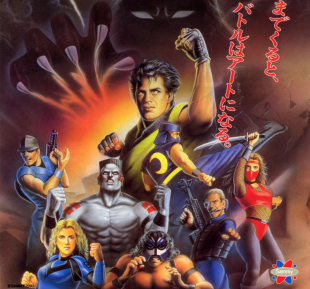 Survival Arts is an arcade-exclusivenote It was about to get SNES and Genesis ports but were canceled. 2D Fighting Game developed by Scarab (who would take another knack at the genre with Battle Monsters), released in 1993 by Sammy. While it uses digitized graphics and blood and gorenote instead of expected Fatalities however, the game has some of the moves obliterate the opponent on critical health, a bit like Brutalities in modern Mortal Kombat games. is present, it would be a misnomer to call it a Mortal Kombat ripoff, as the gameplay is more modeled towards the Street Fighter II mold, complete with the 6-button layout.

One notable feature is cribbed from the Beat 'em Up genre: the ability to get weapons from stages and use them, replacing the standing fierce punches.