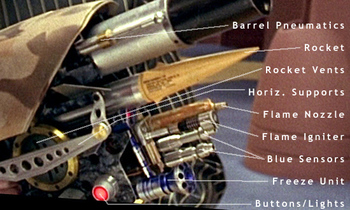 That red button is not just for show.
"Melee weapons that become guns are fricking awesome!"
— Linkara, Atop the Fourth Wall
Advertisement:

There are many ways of accomplishing this. The most common is having your weapon be several weapons in one, whether they are weapons literally strapped onto each other and capable of acting as 2 (or more) weapons at the same time, or having several forms it can cycle through. Or, it may just be a humble single-formed weapon that the user finds many uses for, including uses that are improbable and sometimes non-combat utility that may be mundane in nature.

The advantages are numerous; it gives you more versatility in combat, letting you handle more problems than someone with only one weapon. It also (usually) takes less space than if you carry several weapons at once, making you less encumbered. Be careful of Rummage Fail, however, which is a bit of a problem in the middle of battle. So what else can a character do if they want the versatility of, oh, say... ten pointy and blasty things?

See Magic Tool and Every Device Is a Swiss-Army Knife for the tool-oriented variant of this trope (though weapons that combine the uses of/have tools and weapons in them aren't unheard of). Related is Bifurcated Weapon, a weapon that can be separated into smaller weapons; the fact that the "separated form" and "combined form" add to the user's versatility makes it much like this trope. Sub-Trope of Impossibly Cool Weapon. Supertrope to:

The self-directed version is a Do-Anything Robot. And of course, this weapon goes very well with Adaptive Armor.

Do not confuse with actual Swiss-Army Weapons

Culls weapon has many forms and uses.

Culls weapon has many forms and uses.