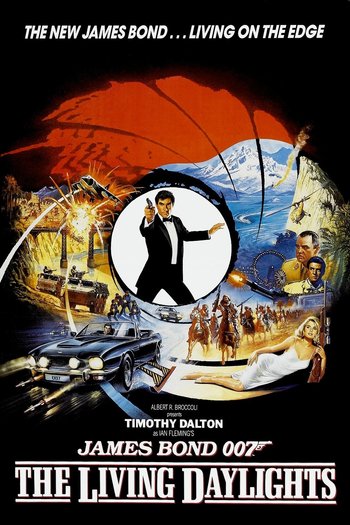 Hey driver, where we going? I swear, my nerves are showing...
"Whoever she was, I must have scared the living daylights out of her."
— James Bond
Advertisement:

The One With… Bond going all The Third Man.

The Living Daylights is the fifteenth James Bond film by Eon Productions, the fourth to be directed by John Glen and the first of the two starring Timothy Dalton, premiering on June 29, 1987. The Title Theme Tune was performed by a-ha.

After a training exercise for Bond and the other 00-Agents in Gibraltar turns deadly for 004 and a few SAS guards the agents were sparring against, Bond is given his next mission: assist in the defection of a highly ranked Soviet general named Georgi Koskov (Jeroen Krabbé) when he visits the Conservatoire in Bratislava, Czechoslovakia (nowadays Slovakia). The defection works out, but Bond suspects something's amiss when the sniper sent to kill Koskov was the pretty cellist (Maryam d'Abo) performing at the Conservatoire, who was clearly not a professional with a sniper rifle. Against orders, Bond merely wounds the woman, before helping Koskov get over the border to Austria via one of Q's contraptions.

Back in London, Koskov reveals that the new head of the KGB, General Pushkin (John Rhys-Davies), is starting up a ruthless counterintelligence operation called Smiert Spionom, Russian for "Death to Spies." Koskov fears that it will lead to retaliation from the British or Americans and possibly even lead to nuclear war. However, before further details can be gleaned from him, Koskov is snatched from the safe house he was being kept in, assumedly by the KGB. Bond thinks there's more to the story than meets the eye, but M is convinced enough to order that Pushkin be killed while at a trade convention in Tangiers, especially when 004's body is returned from Gibraltar with a found note reading Smiert Spionom. Bond accepts the assassination order reluctantly, but decides that there's enough time to investigate things in Bratislava, starting with that pretty cellist...

With the departure of Roger Moore and Timothy Dalton taking over the role, the filmmakers decided to continue the trend that had started in For Your Eyes Only and return to a more serious and dangerous Bond, and to a more realistic and espionage atmosphere, with humour and fantasy being toned down.

The Living Daylights is also the last film:

Preceded by A View to a Kill and followed by Licence to Kill.