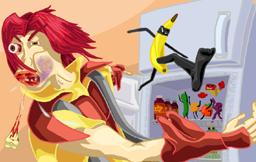 In a World… where a banana can be a ninja, one extraordinary little banana — is a ninja!
Advertisement:

is a Flash cartoon based on the adventures of Baninja, a masked banana on a crusade to save his fellow sentient foodstuffs with his banana ninja skills. Created by "Umbrascitor" in 2007 and launched on the web in January 2009, the series comprises animated shorts made for its own canon storyline, and a number of Original Character Battle Tournament events (such as "Battle of the Elements"

and the "Feast Master"

The initial story arc, "Banana Shop of Horrors," introduces Baninja and his best friend/sidekick Seppuku (who often ends up impaled or otherwise gravely injured) on their first foray into the "outside world" beyond their Clan Hideout. They get a craving for ice cream and stumble upon a sundae parlor called The Happy Banana. When Baninja learns that the Happy Banana parlor isn't a day spa for bananas, the banana snaps and Hilarity Ensues. Baninja hops on a bus to the store; encounters a starving demon-child in a store; fights the Rub-A-Dub-Dub Squad; and finally takes on the manager of the PriceCo Supermart.

Further story arcs (based on OC battles and tournaments) involve the clan taking an interplanetary bounty hunting mission, Baninja entering a cooking contest, and Baninja's ongoing pursuit of a land-dwelling squid. The next series of canon episodes, "Apples and Origins," are said to focus on how Baninja (and presumably the rest of the clan) came to be alive. And a ninja.

The series borders on What Do You Mean, It's Not for Kids? as the often adorable banana graphically kills humans on his quest to save his fellow bananas from a "hot fudgey-coated fate." Action scenes are reminiscent of Samurai Jack, and the world setting evokes the Invader Zim-esque mentality that Humans Are Morons. Also, Humans Are the Real Monsters. The Flash animation is often brought into the "real world" through live-action video clips, ala SpongeBob SquarePants.

The Banana-nana-Ninja! website also features a daily fortune cookie generator; a weekly webcomic (now on hiatus) starring Haiku, a watermelon who only speaks in haiku, an "Ask Baninja!" Q&A column in the spirit of Ask a Ninja, and a Flash game that pits the BNN characters against each other in quick-draw battles.