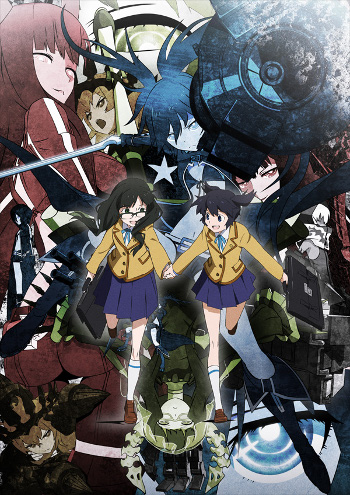 In 2009, it was announced that an OVA of Black★Rock Shooter would be made based on an original story created by huke.

The OVA had a simple plot: Mato Kuroi (voiced by Kana Hanazawa) becomes friends with Yomi Takanashi (voiced by Miyuki Sawashiro) in their first year of junior high school. However, in their second year, they find themselves in different classes and start drifting apart, especially when Mato befriends another girl, Yuu (voiced by Kana Asumi). Meanwhile, in another world, Black★Rock Shooter is seeking out and confronting the mysterious, evil Dead Master. What is B★RS's reason for wanting to fight this Dead Master, and what relation does this have to Mato and her friends?

, running on noitaminA's timeslot during the Winter 2012 Anime season with a different director. The anime began airing on February 3, 2012, and had a slightly retooled plot: Mato Kuroi enters junior high school and meets a girl, Yomi Takanashi, who seems to be completely distant and aloof. An attempt to become friends with her ends up into a nasty run-in with Creepy Child Kagari Izuriha, who seems to be obsessed with Yomi to Yandere levels. Mato ends up wanting to be friends with Yomi anyway, and meanwhile, Black★Rock Shooter seems to be in another world, still fighting...

How much more tropes will I have to write?