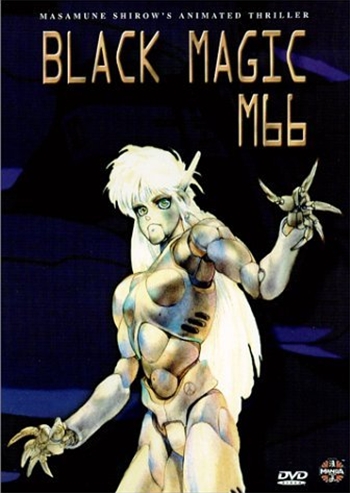 Shirow Masamune's short manga from 1983, adapted into an OVA by AIC in 1987, later released by Manga Entertainment.

Anti-personnel robots have escaped after a plane crash. Specialists and the military are called to the site of the crash, but they can't figure out why the robots would have torn out of their cases - unless they were programmed to hunt someone. The others at the scene are Sybil and Richard, two investigative reporters looking for a scoop. They soon find themselves more involved in the case than they'd like, protecting a young girl, Paris, the inventor's granddaughter...

This OVA is the first adaptation of one of Shirow Masamune's works, and the only one to date in which he had direct involvement in the production (writing, storyboarding and co-directing it). The OVA is notable for having a very dedicated animation quality, in large part due to the extensiveness of Shirow's storyboarding. It combines action and comedy and also takes much inspiration from Terminator.