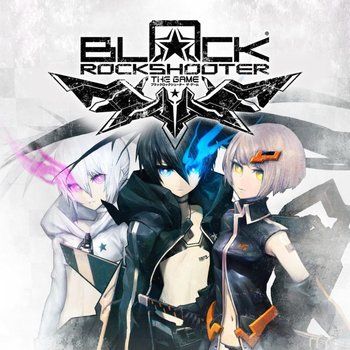 Black★Rock Shooter: The Game (stylized as BL★CK ROCKSHOOTER: THE GAME) is a 2011 PlayStation Portable Spinoff, developed by Imageepoch, based off the Black★Rock Shooter character and franchise. It can best be described as a hybrid RPG/Third-Person Shooter game.
Advertisement:

In the year 2051, humanity is on the verge of extinction following an alien invasion that started nearly fifteen years ago. With their backs to the wall, the last twelve humans awaken a mysterious Super Soldier known as "B★RS" (or "Stella") as part of their last desperate push against the alien menace.

Nippon Ichi licensed the game for release in English. After over a year of waiting and numerous rumours that the game had become Vapor Ware, it was finally released on the Playstation Store in the US and EU with the original Japanese voice cast.

A manga adaptation for the game was also released, further expanding parts of the lore which were not (or briefly) discussed in the game.

Additional tropes found in the manga adaptation of this game: