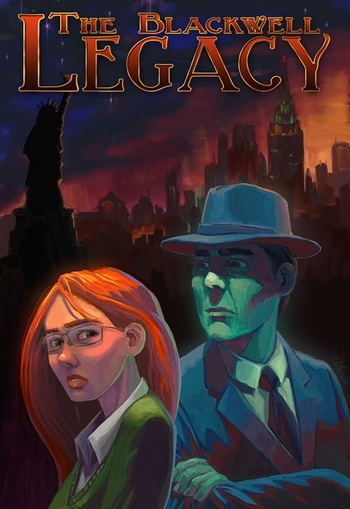 Rosa (left) and Joey (right). They lay the dead to rest
Advertisement:

A series of independent Adventure Games created by one Dave Gilbert

of Wadjet Eye Games, which features supernatural mystery solving and a unconventional inventory system. The series is technically a Continuity Reboot of a planned series of freeware games called Bestowers of Eternity, of which only part one was released.

The main characters are the introverted unwilling medium, Rosangela Blackwell, and her family's crotchety guide to the world beyond, Joey Mallone, a ghost with a Mysterious Past. Together they must help the restless and bodiless souls of New York City to move on to the next plane of existence, which is rarely an easy task, requiring interrogations, exploration, and not a small amount of breaking and entering. Meanwhile they uncover more about the Blackwell family's past, and the nature of mediums and spirit guides and other people like them who delve into the supernatural.

Check them out here

, on Steam or on GOG.com. There's also a couple promotional

See also The Shivah and Unavowed which takes place in the same universe as this series.