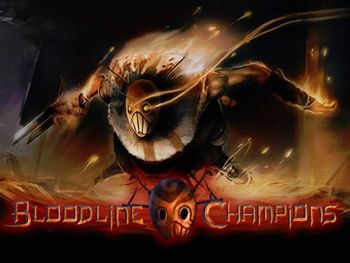 Bloodline Champions is a free-to-play player vs. player arena game. While its use of a single team of one Player Character per player against another team and bird's eye perspective leads some to compare to other Multiplayer Online Battle Arena games, its focus and intent is much more different.
Advertisement:

All offensive abilities need to be aimed at their targets. Even most of the defensive abilities require targeting in that manner. There is no Mana Meter, only cooldowns to abilities. Successfully using abilities increase your energy meter, allowing you to cast more powerful or different "EX" versions of two of your abilities for 40% of the bar each, or your ultimate ability for 100% energy. There are no levels within matches (though there is such a mechanic for accounts), no one else to kill in the game and no base to destroy in the Arena game mode, the only one that is scored within ladders.

A spiritual sequel, Battlerite, now exists. It was developed and published by the original developers Stunlock Studios and co-invested by Coffee Stain Studios, the developers of Sanctum and Goat Simulator. It was released on November 8, 2017.

Character page is here, holding the classes or "bloodlines" of the game, and has most of the tropes considering the importance of them to the game.