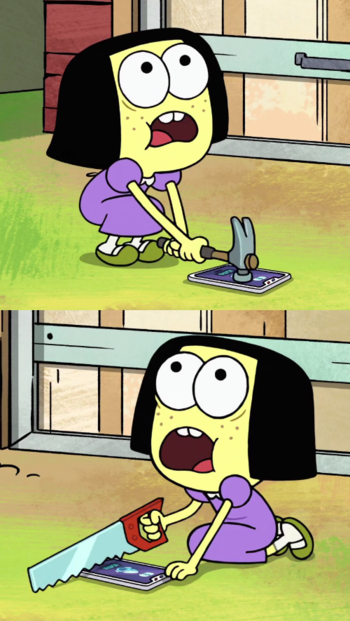 For context, she's trying to free what she thinks is the soul of a woman trapped in that phone.
"I don't know how to work this machine... Spending the nights alone, talking to yourself into an obvious Nazi machine. This is a Red China, Manchurian Candidate machine because I can't record anything, and when I do I automatically erase it."
— Judy Garland battles a tape recorder, Judy Garland Speaks
Advertisement:

Technology is a very important aspect of modern life. From cellular phones to desktop computers to automated banking machines to cars, we have all kinds of mechanical and cybernetic gadgets that (at least for some of us) we can't imagine living without.

But there are some people who just don't understand technology. The newer or more mainstream it is, the more likely it is that such people will be left totally bamboozled by it.

This comes in two types: Completely Hopeless: Alice can't work her way around computers. Give her a cell-phone (especially of the very latest model), and she's clueless as to how it's supposed to work. Digital cameras leave her wondering how they're supposed to be used. (Where do you load the film? Where can you get it developed?) She's bewildered by all the complicated technical stuff that others take for granted. If she makes an effort to use any technology despite her cluelessness (usually in an attempt to prove that she can in fact get the concept), very bad things happen. Basic Understanding: Bob has a basic understanding of how a computer is supposed to work (meaning he can browse through folders, surf the Internet, send an email, type, et cetera), but disassemble the parts and challenge him to put it back together, and he's stuck in a rut. He knows the fundamentals of using a cell-phone (you dial numbers and communicate with others), but the various additional functions have him lost, especially if it's a model he's not used to. He knows how to drive a car and the basic fundamentals behind it (press the gas to go and the brake to stop, use the steering wheel to direct the car), but he's stumped when it comes to pinpointing specific engine parts or knowing what wires go where.

In fiction, both types may be Played for Laughs, depending on the character and the situation.

Compare Walking Techbane, which may wind up being the absolute worst-case scenario, Ludd Was Right, for those who don't like technology, thinking it's a hassle, Technologically Blind Elders, and Evil Luddite, who refuses to accept technology because of its perceived evil. Contrast Technopath and Gadgeteer Genius.

When this trope is applied to advertising (usually for Rule of Funny), that's a form of Too Incompetent to Operate a Blanket.

After Susie takes Oscar's camcorder, she tries to take the tape out but can't figure it out.

After Susie takes Oscar's camcorder, she tries to take the tape out but can't figure it out.