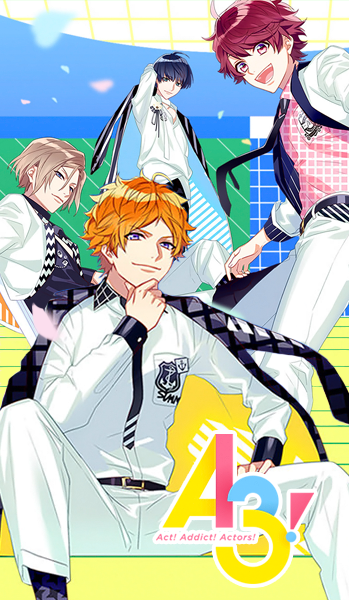 Act, Addict, Actors!, or commonly referred and shortened as A3!, is a mobile game created by Liber Entertainment, the creator of the rhythm game I-Chu.

In A3, you play as Izumi, a young woman who is visiting a theater for a troupe that is said to be her father's theater company. But when you arrive at the theater, not only is the theater itself in shambles, the troupe is also buried in debt. As the daughter of the previous director of said troupe, your job is to gather members as actors to bring the troupe back to its former glory.

The troupes you manage are as follows:

The series has its own discography as well, consisting of the theme songs for their various plays and Image Songs for all of the characters.

An English port of the game was announced in 2018 and released by Cybird on 23 October 2019. A Chinese port was released late August 2018 under Komoe Game. The English port was discontinued in early 2022.

This page is for the tropes present in the video game. For tropes common to all media in the franchise and for the plays staged by the fictional MANKAI Company, please see here. The page for the character sheet is here. The tropes found in the stage play and movies are here.

The video game A3! contains examples of: