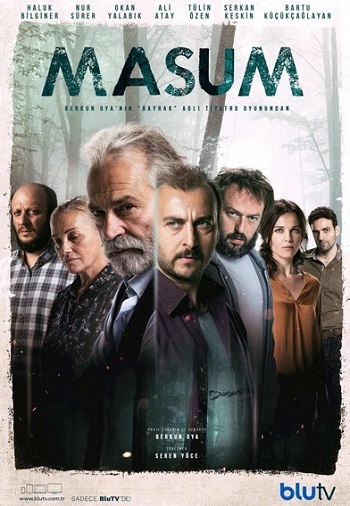 Innocent (Masum) is a 2017 Turkish miniseries starring Ali Atay, Haluk Bilginer, Nur Sürer, Okan Yalabık and Tülin Özen. It is based on the play "Bayrak" ("Flag") by Berkun Oya, who also served as screenwriter for the show.

Assigned to a bewildering unresolved case, Istanbul detective Yusuf returns to his childhood hometown, where he is reunited with his former mentor, Cevdet Bayrakçı — who also happens to be the target of the investigation. Set to enjoy a quiet retirement with wife Nermin, Cevdet's life was rocked by a series of tragic events that resulted in the death of his son, Yusuf's childhood friend Taner, and the mental deterioration of Taner's younger brother, Tarık. The sudden arrival of Yusuf not only reopens fresh wounds, but threatens a fragile peace as he uncovers family secrets best left concealed.

As he is pulled into the complicated lives of the Bayrakçı family, Yusuf finds himself mired in a mystery fraught with terrible secrets, shocking crimes, and hidden motives.