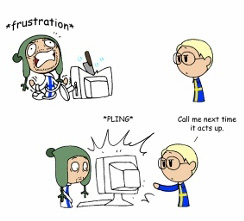 The opposite of Walking Techbane, these people are just uncannily able to get recalcitrant technology to work. It's not just fixing them, it's miraculous things like getting computers to behave when touched or make the BSOD go away by looking at it. Techfixes are people for whom Percussive Maintenance works.

Just as Techbanes can be quite knowledgeable about computers but unable to operate them, certain Techfixes may not know anything about the technology they fix.

Often an ability of the Technopath. Might have Machine Empathy as a secondary effect.

If it's only a specific device (usually a vehicle) they have this effect on, see Only I Can Make It Go.