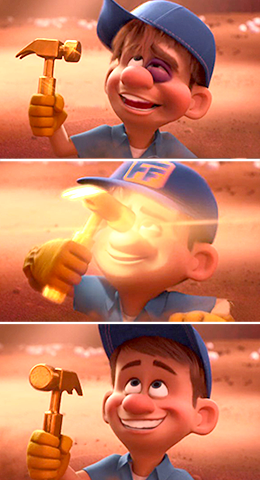 It looks like a weapon, it's used like a weapon, but it's just not a weapon. It's actually a purely healing, defensive, or support implement that happens to be in exactly the shape of a sword, arrow, gun, whatever.

Occasionally, this comes from the target, not the weapon. A certain type of enemy might absorb a certain type of attack into its own HP. This mostly happens to elementally-inclined enemies who absorb their own specialty, so that a character who can absorb the fire element will be healed by fire spells and flaming weapons, etc. The Healing Shiv could also become a normal (or better!) weapon if said target is undead.

Occasionally, it's the ammo that possesses healing/supportive capabilities rather than the weapon; so it's possible to use a regular gun for this simply by loading them with said ammo.

Not to be confused with Recovery Attack. For regular shivs, see Sinister Shiv.

Compare and contrast Percussive Maintenance, where devices are fixed by attacking them through mundane means. Contrast Deadly Doctor, someone who uses medical skills and equipment to hurt people and Revive Kills Zombie.

Sparks' REVIVR rifle is primarily used to pick up her incapacitated teammates.

However, it doubles as a marksman rifle and skilled players can be very effective with it.

Sparks' REVIVR rifle is primarily used to pick up her incapacitated teammates.

However, it doubles as a marksman rifle and skilled players can be very effective with it.