Video Game / Tales of the World

A Massive Multiplayer Crossover subseries of Namco's Tales of series. Two of them, actually, under different subtitles. 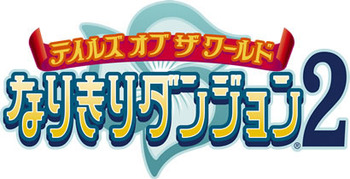 The first subseries is the Narikiri Dungeon series, which itself is a spinoff from a sequel to Tales of Phantasia. The series' key feature is the ability of the Original Generation main characters to "dress up" as various character classes (Fighter, Thief, Mage, etc.) and gain new powers depending on which role they are portraying. Their wardrobe includes the outfits of various Tales Series heroes and villains, and even cameos from various Namco Bandai games.

Narikiri Dungeon 2 (2002) and Narikiri Dungeon 3 (2005), both developed by Alfa System, revolve around a pair of youngsters named Calo Olange and Frio Sven, who must wander the Tales pseudo-timeline and prevent it from being mucked up. Narikiri Dungeon 3 incorporated tactical elements, allowing you to recruit all the Tales heroes, arrange them into four teams of up to three each, and move them around the map to solve puzzles and administer a collective beatdown to the boss.

The second subseries is called Radiant Mythology and was created for the PSP. The series contains three games, and were developed by Alfa System.

Each game takes place in its own world.
When the World Tree senses a threat to its world, it creates a Descender as its defense mechanism. The Descender is a warrior with the mission to save the world and keep the World Tree safe, and is the role the player takes on. The Descender joins up with the Tales Series characters to battle whatever is threatening the future of the world.

Gameplay revolves around joining and accepting quests from Ad Libitum, a guild run by a multitude of Tales Series characters. The games allow the Descender to take on a variety of classes, along with the chance to unlock advanced classes. Mostly, though, the games are all run on the idea of having fun by fighting alongside characters from the various Tales of games and seeing them interact with each other in skits.