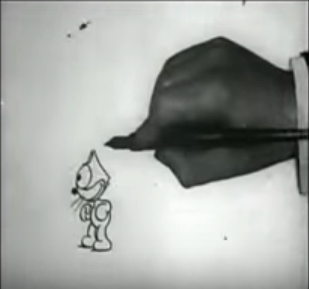 First you draw a circle, then you dot the eyes, add a great big smile, and presto, it's Felix!

The cartoon starts with an artists hand drawing Felix with a pen. Felix comes to life and bows to the audience, but he gets annoyed that the artist forgot his tail. The artist adds it, much to Felix's happiness, but his request to be fully inked is ignored. Felix walks off to a shoe shiner, who uses boot-blackener to ink and shine him. Felix pays him and walks off, but gets pelted by water, prompting him to grab a pine tree and use it as an umbrella. Felix then realizes the water is actually tears from a female cat nearby. Felix walks up and asks her what's the matter, and she hands him a paper. Felix tries to cheer her up, but realizes that she's kinda ugly looking, and has been feeling heartbroken. Felix decides to fix this and signals for the artist to hand him an eraser. He erases her face and gets an ink pen from the artist to redraw it to look much prettier. Felix gives the artist the pen and shows the girl her reflection, making her happy. Felix then walks to a giant flower and plucks it, giving it to her as a dress. Felix goes to look for a gift for her—he balks at buying expensive pearl necklaces, so he goes near an ocean. He asks the artist to draw a string for him, and he uses it to descend below. He passes by some giant fish and sees some baby oysters sleeping. Felix tickles them open, and finds some pearls in the third one. Just then, an oyster catches Felix and calls for the mother oyster, who chases Felix. Felix evades her, but ends up fighting a giant eel, while also encountering other undersea monsters. Felix calls for the artist to help him, prompting him to pour a bottle of ink into the ocean. Felix escapes the monsters through it and breaks the surface, having claimed the pearls as his own. He brings them to the cat girl as a gift, and then heads off to the arctic to find her a fur coat. He sees a black bear near an igloo, and grabs the ground below him to pull him towards him. Felix fights the bear, but loses. The cartoon starts to iris out, but Felix stops it and pushes it back. Felix signals for the artist to grab the bear, and his hand hoists it in midair, pulling off its fur coat like it was an actual coat and gives it to Felix. Felix thanks the artist and runs back to the cat. He gives her the fur coat, but then she asks him to give her the moon. Felix, fed up with doing favors for her, grabs the paper she's on, rips it off and rips it to pieces happily as the cartoon ends.

The cartoon is in the Public Domain and can be viewed here.

Do not confuse it with The Twisted Tales of Felix the Cat episode of the same name.