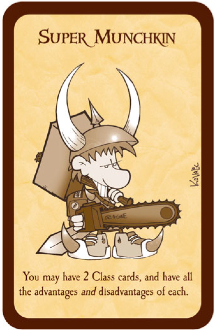 Features and weaknesses?note Later versions of this card state that you could also play it as one-class-with-no-weaknesses What a rip off!
Advertisement:

A form of Power-Up in Role Playing Games with a Class and Level System, whereupon a character can choose to advance from a basic starting class to a more powerful, but more specialized class. What distinguishes a Prestige Class from a regular one is that you must have experience in another class before you can gain access to the Prestige Class, thus creating a natural progression of power.

The trope namer is 3rd Edition Dungeons & Dragons,note where they were initially introduced as a tool for the DM for customizing NPCs where Prestige Classes would become available after fulfilling certain class-specific prerequisites. The degree of specialisation required would vary from class to class; one Prestige Class — the Fochlucan Lyrist — requires taking levels in three separate base classes. The Fochlucan Lyrist class itself is an updated version of the original way you became a Bard in the first edition of Dungeons & Dragons, which involved a maddening process so convoluted and subject to chance that it handily explains why most Bards these days are Chaotic.

A more recent progression (in games with single-class characters) has been to unlock Prestige Classes when the player raises at least one character to the prerequisite level. The player can then create a new character with the Prestige Class.

Compare and contrast Class Change Level Reset, where changing classes lets you keep some or all of the benefits of a previous class, but requires some leveling to return to your previous power level. The two occasionally overlap.