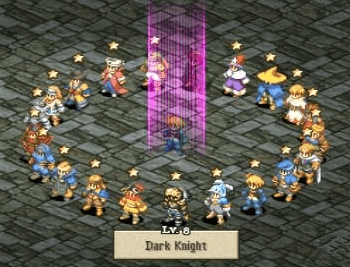 "There are bodyguards, bouncers
TV announcers
Farmers, models
Unless your daddy's rich
You need la, la
An Occupation for you
(How 'bout salesman, huh?)"
— Sparks, "Occupation"

A variation of the Class and Level System where instead of a character being locked into a single class for the entire game, the player is free to switch between distinct classes ("jobs") at his leisure, to adapt his character or party to different situations as the game progresses. Most often seen in Eastern RPGs.

The ability to change a character's job is usually accessed through the party's menu outside of battle (though some games may instead require visiting a specific location to change jobs).

Each job has an associated Level independent of the Character Level, which dictates his proficiency with the assigned job and unlocks new job skills and/or abilities as it levels up. For example, if you've never put a character on Mage duty, they will have a minimum Mage level (and only beginner-rank spells to use), whereas a character who has reached maximum Mage level will have a wide arsenal of magic at his command.

Another common feature is the ability to mix-and-match a limited amount of skills from one job onto another, such as allowing a Warrior to wield White Magic and heal his comrades during battle, or allowing a Mage to equip a sword and shield instead of the usual staff or rod.

Exactly which jobs a character has access to varies: Sometimes the job system is completely freeform and a character can change to any available job, while other times it is hierarchial and more powerful jobs must be unlocked by meeting certain prerequisites (such as mastering the lesser jobs first).

Skills are generally handled in one of three ways -

Finally, when a character levels up, his current job may have an effect on his statistics — this usually falls into three categories:

Compare Stance System; the Job System differs in that Stances often can be changed at any time in or out of battle, whereas Jobs can (usually) only be changed outside of battle and/or at a specific location. Also, each character generally has a set of Stances unavailable to other characters, but Jobs are a roster available to any character. See Fantasy Character Classes for some examples of available jobs.

Also related to Limited Move Arsenal, which may overlap with this, as that's for when characters's usable moves are only a subset of what they can learn.