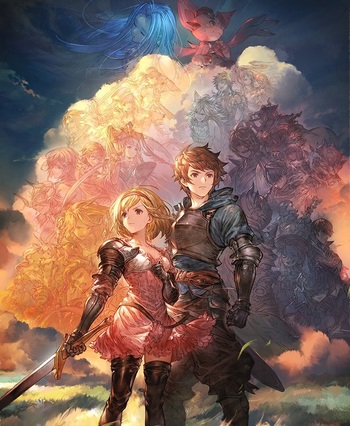 Into the blue. And beyond.
The end—the end of the sky. At last I've finally reached it. My dear child, I await you on Estalucia, the Island of the Astrals.
— The Captain's Father
Advertisement:

Granblue Fantasy (グランブルーファンタジー) is a free-to-play, browser-based Eastern RPG developed by Cygames and released in 2014. It can also be played on mobile phones, with apps available on Android and iOS platforms. It has not officially been released outside of Japan, but an English language option was implemented in March 2016. It features a notable collaboration between Nobuo Uematsu (providing some of the music) and Final Fantasy IX artist Hideo Minaba (as the character designer). It's incredibly popular in Japan, with over 31 million registered accountsnote including players all around the globe as of February 2022 (gaining about a million every four to six months).

You play as a young man or woman living in a world of floating islands amidst endless skies. One day your home island is attacked by the evil Erste Empire, which is pursuing a mysterious young woman and the Summon Magic she controls. This fateful encounter sparks a grand expedition in a badass airship to discover the mythical island of Estalucia, said to be hidden at "the edge of the sky".

Aside from the main game proper, it has also spawned side products in other forms of media:

Has nothing to do with Grand Blue (even though "Grand Blues!" *is* actually a Granblue Fantasy 4koma comic and anime adaptation), and also not to be confused with the similarly-sounding Granbelm.

Beware of potentially unmarked spoilers from older stories and events!

You got the Example List!
Trope-tan joined your party!
Check out her fate episode!